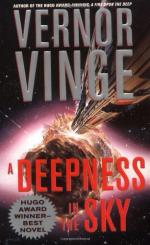 A Deepness in the Sky Summary & Study Guide

Vernor Vinge
This Study Guide consists of approximately 36 pages of chapter summaries, quotes, character analysis, themes, and more - everything you need to sharpen your knowledge of A Deepness in the Sky.

A Deepness in the Sky Summary & Study Guide Description

A Deepness in the Sky Summary & Study Guide includes comprehensive information and analysis to help you understand the book. This study guide contains the following sections:

This detailed literature summary also contains Topics for Discussion and a Free Quiz on A Deepness in the Sky by Vernor Vinge.

Two races of people, the Emergents and the Qeng Ho, arrive at the OnOff star at the same time. The star is an anomaly in which the energy is literally switched off for two hundred fifteen of every two hundred fifty years. The two races have very different goals. The Emergents plan to mine and exploit the area for everything they can find of value while the Qeng Ho hope to establish a profitable trading relationship. The goals being at such odds, the two races clash and the Emergents mount a surprise attack in which the Qeng Ho are all but annihilated. The surviving Qeng Ho are forced into something akin to slavery with no real freedom to make their own decisions. The Emergents, however, are also crippled during the fight and realize that they are going to have to wait years for the Spiders to develop the technology necessary to allow them to travel back to their home.

Meanwhile, the Spiders are involved in something akin to a civil war. The various nations are at odds and war seems possible. A young Spider named Sherkaner Underhill marries a young military general named Victory Smith. The two shun tradition, having children out of the traditionally-accepted phase. This sparks a national crisis and a kidnapping that results in the death of one of the children. Meanwhile, Sherkaner's brilliant mind comes up with ideas for expanding the nation's ability to withstand the rigors of the Dark. Though the thought of remaining above ground throughout the "off" years when the star puts out no energy is abhorrent to some, the possibility soon becomes reality.

The Emergents and Qeng Ho are diverse groups. The leaders include a man who was taken from his home as a youngster and a young woman who has spent the majority of her life aboard the Qeng Ho ship. The Spiders are equally diverse, ranging from traditionalists who believe life must go on as it has for generations to the free-thinkers who believe that progress is within reach.

The Emergents plan to begin an international war among the Spiders, hoping to effectively cripple the entire planet in order to mount a takeover. It's not until a crew is landing on the planet's surface that they discover that Sherkaner has long been monitoring the humans and that the military is prepared for the invasion. The Spiders prevail over the Emergents. While all this is taking place, a Qeng Ho named Pham Nuwen plans to regain control of the fleet. Pham is successful, gaining control just as the Emergents are defeated by the Spiders. The humans make formal contact and set up trade agreements with the Spiders while the Spiders themselves learn to handle their emerging technological advances that change their world forever.

More summaries and resources for teaching or studying A Deepness in the Sky.

A Deepness in the Sky from BookRags. (c)2022 BookRags, Inc. All rights reserved.