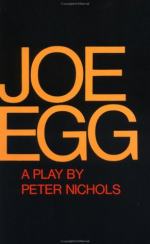 A Day in the Death of Joe Egg Summary & Study Guide

Peter Nichols
This Study Guide consists of approximately 51 pages of chapter summaries, quotes, character analysis, themes, and more - everything you need to sharpen your knowledge of A Day in the Death of Joe Egg.

A Day in the Death of Joe Egg Summary & Study Guide includes comprehensive information and analysis to help you understand the book. This study guide contains the following sections:

This detailed literature summary also contains Quotes and a Free Quiz on A Day in the Death of Joe Egg by Peter Nichols.

The following version of this book was used to create the guide: Nichols, Peter. A Day in the Death of Joe Egg. Samuel French, 1967.

This play consists of two acts. Neither act has any scene breaks. Though there are six actors in the play, one of whom plays multiple characters, only three actors appear in the first act. This is a metaplay, a play wherein theatrical conventions are openly acknowledged. All of the characters acknowledge and address the audience, although one only does so in another character's fantasy.

Bri and Sheila care for their severely physically and cognitively disabled daughter, Joe. Though Joe is the titular character, Bri is the protagonist of the play. When the play opens, Bri, a teacher, is addressing his students, the audience members. He is keeping them after class in order to punish their unruly behavior. However, after he inadvertently makes a sexual remark while fantasizing about his wife, Sheila, he decides to leave his students and go home early. When he comes home, he tells his wife he wants to make love to her. She rebuffs his sexual advances, providing two excuses he finds unsatisfying. First, Joe will come home from nursery school soon. Second, she has to get ready for rehearsal at her community theater troupe. Dissatisfied, Bri accuses Sheila of rebuffing him because she is having an affair with Freddie, a member of her troupe. She denies his accusations. He goads her by reminding her of her premarital promiscuity. She tries to placate him by saying she will call his mother to babysit Joe, and he can come to rehearsal with her. Afterward, they can come home and make love. He refuses her offer, because her rehearsals bore him.

The couple's fight is interrupted by Joe's arrival. Joe has a manual wheelchair, but she cannot wheel herself. Bri wheels her into the house. Her diaper is wet, and her nurse has sent a note saying the frequency of her seizures has increased, perhaps because the school has run out of anti-convulsion medication. Joe has a seizure, and Bri and Sheila give her medication. Then Sheila exits to the bedroom to change for rehearsal. Bri and Sheila both deliver monologues to the audience. Bri says Sheila embraces all living things, including Joe, but he is no longer emotionally attached to his daughter. He says talking to Joe is like talking to a wall, because she has no discernible will or personality. After his monologue is finished, he wheels Joe to the kitchen for tea. While she is changing, Sheila addresses the audience. Sheila says Bri is jealous, because she pays so much attention to Joe.

Bri hears her talking about Joe, so he returns from the kitchen. Bri and Sheila reenact their daughter's birth and medical diagnosis for the audience, using a tubular cushion to symbolize Joe. In addition to playing himself, Bri plays the doctor and the vicar with whom Sheila interacts. Bri and Sheila also tell the audience when they disagree about details in the narrative. Sheila believes Joe's disability is a punishment for her premarital promiscuity. Bri believes Joe is disabled because the doctor who delivered her was incompetent. When the reenactment is finished, Bri remembers Joe is in the kitchen. He exits to get her. While he is gone, Sheila shares her hope for Joe's eventual recovery with the audience. In Sheila's fantasy, which the audience also sees, Joe jumps rope while spelling polysyllabic words. Act One ends with the Joe of Sheila's fantasy telling the audience two house guests, Freddie and Pam, will visit in Act Two.

Act Two opens with Sheila, Freddie, and Pam returning to Bri and Sheila's house after Sheila's rehearsal. Freddie has agreed to come in and reassure Bri Sheila and he are not having an affair. He has an ulterior motive, however. He believes he will improve Bri and Sheila's marriage if he can convince the couple to place Joe in a residential home and have another child. His wife, Pam, hopes she will not meet Joe during her visit. As she eventually tells the audience in her monologue, she believes all people with disabilities should be euthanized.

After Bri greets the company, Sheila brings Joe downstairs. After Joe has a seizure, Bri says he accidentally spilled her anti-convulsion medication down the sink drain. Since he also says he thinks Joe's life is worthless because she can neither make nor enact decisions, Freddie and Sheila suspect Bri's disposal of Joe's anti-convulsion medication is not accidental. Pam offers to go buy more medication, hoping to escape Joe. All of the characters debate the morality of Bri's action and his intention to end Joe's life. Largely because of Bri's intentional misdirection of the other characters, no one leaves to buy medication.

Bri's mother arrives. Grace tells the audience that, like Freddie, she believes the demands of caring for Joe are straining Bri and Sheila's marriage. Bri offers to take Grace home. Before he leads her out, he sneaks Joe outside. Grace says this is a particularly icy winter evening, so Bri leaves Joe lying on the seat of his car. Since she is already weakened without her convulsion medication, he hopes her time in the cold will finally end her life. When Bri comes back inside to get his mother and inadvertently confesses he did not even attempt to start the car the first time he went outside, Freddie suspects what he has done. Before Freddie can go outside, Bri brings Joe back inside the house, as he believes she is finally dying.

The other characters hold a feather to her mouth to see if she is still breathing. She is not. Excepting Bri, all of the characters exit to take Joe to the hospital. Bri tells the audience that, after Joe was revived at the hospital, he decided to leave Sheila. Sheila returns home with Joe before Bri leaves. He tells her he is driving to a pay phone to call in sick to work. He exits with a suitcase.

More summaries and resources for teaching or studying A Day in the Death of Joe Egg .

A Day in the Death of Joe Egg from BookRags. (c)2022 BookRags, Inc. All rights reserved.