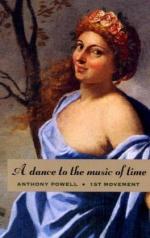 A Dance to the Music of Time: A Question of Upbringing. a Buyer's Market. the Acceptance World Summary & Study Guide

Anthony Powell
This Study Guide consists of approximately 30 pages of chapter summaries, quotes, character analysis, themes, and more - everything you need to sharpen your knowledge of A Dance to the Music of Time.

A Dance to the Music of Time: A Question of Upbringing. a Buyer's Market. the Acceptance World Summary & Study Guide Description

A Dance to the Music of Time: A Question of Upbringing. a Buyer's Market. the Acceptance World Summary & Study Guide includes comprehensive information and analysis to help you understand the book. This study guide contains the following sections:

This detailed literature summary also contains Topics for Discussion and a Free Quiz on A Dance to the Music of Time: A Question of Upbringing. a Buyer's Market. the Acceptance World by Anthony Powell.

Nicholas Jenkins is in school as the story opens. He lives in a house with two friends, Peter Templer and Charles Stringham. Among the other members of the house is an older student named Kenneth Widmerpool and the house master named Le Bas. Widmerpool is always at the edge of the group, not quite fitting in with any group though he constantly works at trying to make himself fit for teams in season. On a particular day, Jenkins encounters Widmerpool out for a run. His dedication attracts the attention of team leaders even though he lacks the skills to be a good athlete. Widmerpool is plagued by a tendency to always be somewhat lacking in appearance. A coat that he wears prompts other members of the house to refer to clothing that does not quite seem "right" as "a Widmerpool."

Templer and Stringham are two very different people. Nicholas likes them both despite their differences. When they leave school, the boys go somewhat different directions. Jenkins begins college and the following semester he is joined by Stringham. One day Templer arrives with two friends and takes Stringham and Jenkins for a ride. They pick up two young girls and Stringham has an accident, stranding the group on the side of the road until a bus happens along. Jenkins notes that the incident was something of a signal that the friendship between Stringham and Templer has come to an end as each move into their respective futures far apart from each other.

Stringham marries first and Templer begins a job while Jenkins finishes college. Over the coming years, the men meet only occasionally though Jenkins continues to bump into them and into Widmerpool. In London during a social season, Jenkins and Widmerpool arrive at the same party and Jenkins has become interested in a young girl, though he loses interest when she pours sugar on Widmerpool's head.

Jenkins begins work in a publishing house and continues to work on his own writing. One night he meets up with a family friend from his childhood, Mr. Deacon, who introduces him to a young artist named Barnby. On another occasion, he meets with his Uncle Giles who introduces him to a woman named Myra Erdleigh, a woman who tells fortunes and who will reappear in Jenkins' life in the future.

Jenkins meets the sister of his friend Templer as a young student and reconnects with her long after her marriage. Over the years, this kind of reconnection is common for Jenkins who finds himself encountering people from his past in what seems a series of unrelated events.

More summaries and resources for teaching or studying A Dance to the Music of Time: A Question of Upbringing. a Buyer's Market. the Acceptance World.

A Dance to the Music of Time: A Question of Upbringing. a Buyer's Market. the Acceptance World from BookRags. (c)2022 BookRags, Inc. All rights reserved.