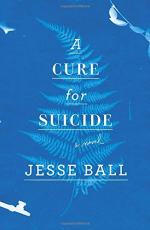 A Cure For Suicide Characters

Jesse Ball
This Study Guide consists of approximately 38 pages of chapter summaries, quotes, character analysis, themes, and more - everything you need to sharpen your knowledge of A Cure For Suicide.

The character of the claimant/Clement/Anders/Martin/Henry serves as the novel's main character. Through him and his experiences, readers learn about the cure for suicide and see the thread of the themes of choice, identity, and grief that run throughout the novel.

Clement is the claimant's real name. He's the person who sees the interlocutor in the section called "The Place You Go Last" who's first referred to as the petitioner.

He was Rana's boyfriend/lover and was asleep, next to her, when she died. When he decides to go through with the cure for suicide, he loses his given name and starts over. Clement is now dead. Fogging should erase his memory and those who knew him receive a letter making it clear that he's no longer with them. In trying to remake his life, his examiners give him different...

More summaries and resources for teaching or studying A Cure For Suicide.

A Cure For Suicide from BookRags. (c)2022 BookRags, Inc. All rights reserved.