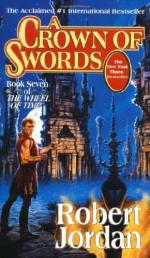 Robert Jordan
This Study Guide consists of approximately 39 pages of chapter summaries, quotes, character analysis, themes, and more - everything you need to sharpen your knowledge of A Crown of Swords.

A Crown of Swords Summary & Study Guide includes comprehensive information and analysis to help you understand the book. This study guide contains the following sections:

This detailed literature summary also contains Topics for Discussion and a Free Quiz on A Crown of Swords by Robert Jordan.

A Crown of Swords, by Robert Jordan, is the story of Rand al'Thor and his struggle to ready himself to face the Dark One. In the story, Rand must fight Dark Friends and himself in order to stay alive and sane. There are those that fight to help Rand, but for each person that joins Rand, there are more that join the Keeper's army.

Rand has escaped being in a box that Aes Sedai have put him in and now is with Min and Perrin. They are making their way to the kingdom that Rand has promised for Elayne to rule. When they reach the city, Rand finds that there is a woman that has put herself as queen. There are those that come out to speak against the queen and Rand sentences her to exile on a farm rather than death. The woman kills herself rather than live as a farmer. Rand and Perrin have a fight because Perrin fears what Rand is going to let be done to the Aes Sedai they have as prisoners, although many of them have sworn fealty to Rand. Rand sends Perrin away and Perrin leaves, although he continues to work to help Rand.

Mat, Elayne, and Nynaeve are in a city looking for an item called the Bowl of the Winds. Even though it is winter time, it is hot and the land is dying. The Bowl of the Winds holds the power to stop the Keepers dark hold on the Land. While looking for the Bowl, Elayne and Nynaeve stumble on a group of women that are called the Kin, or the Circle. These are women that can channel, and Elayne is able to convince them to join with them, which more than doubles the number of women that Egwene will have to command as the rebel Aes Sedai.

The group goes to retrieve the Bowl but is attacked by a creature that was created by the Forsaken to kill Aes Sedai. Mat is able to frighten the creature off using his medallion, but knows that the creature will come back. Mat convinces the women to take the Bowl and flee the city, but the city is attacked as they are leaving and Mat is trapped in the town when the fighting begins.

Meanwhile, Rand and several of his Ashaman get ready to go to fight Sammael, one of the Forsaken. Rand meets Sammael and defeats him. Rand is given the crown in Illian and as he picks it up to put it on, he pricks his finger on one of the swords on the crown. The crown is renamed the Crown of Swords.

More summaries and resources for teaching or studying A Crown of Swords.

A Crown of Swords from BookRags. (c)2022 BookRags, Inc. All rights reserved.