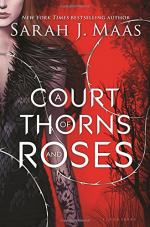 A Court of Thorns and Roses Summary & Study Guide

A Court of Thorns and Roses Summary & Study Guide Description

A Court of Thorns and Roses Summary & Study Guide includes comprehensive information and analysis to help you understand the book. This study guide contains the following sections:

This detailed literature summary also contains Quotes and a Free Quiz on A Court of Thorns and Roses by Sarah J. Maas.

The following version of this book was used to create this study guide: Maas, Sarah J. A Court of Thorns and Roses. Bloomsbury, 2016. Paperback Edition.

The story begins with 19-year-old Fayre hunting in the winter for her family. Food is scarce and she ends up killing a wolf she believes to be a faerie out of pure hatred for their kind. However, after killing it, Fayre is forced to go to the faerie land of Prythian and live with a High Fae named Tamlin as punishment. Once there, she meets a second faerie named Lucien who is initially hostile to her after the death of his friend, Andras. She learns that she is living in the Spring Court, one of seven courts scattered throughout Prythian that are all home to High Fae. Tamlin tells her that her family is taken care of in her absence. She begins to befriend Lucien, and survives attacks from two dangerous monsters thanks to Tamlin.

When Tamlin takes her to his study, Fayre begins learning how to read. She also asks Lucien how to catch a Suriel, a type of faerie that must tell the truth to any question given by someone who ensnare them. Despite the risk, Fayre decides to capture a Suriel. She succeeds and the Suriel tells her the story of a High King who rules another faerie land. The creature also tells her to stay close to the lord because he will protect her. However, before Fayre can ask for more, they are attacked by vicious nagas. Fayre manages to kill two of them before Tamlin comes to her rescue.

At dinner that night, Tamlin reveals that her vow to her mother - to keep her family safe - has been fulfilled by him. This means that Fayre has no reason to return home. However, Fayre begins to have nightmares of killing Andras. To try and cheer her up, Tamlin and Lucien escort her to a glen with a lake made of starlight. Tamlin tells her that Lucien abandoned his court after his father executed the love of Lucien’s life. On the ride home, Lucien gives Fayre his dagger as an apology for not protecting her from the nagas.

Later, Tamlin takes Fayre to an extensive gallery and gives her some paints and brushes at her request. Fayre, who has loved painting since she was a child, is delighted and paints for most of the following days. Later that week, a celebration called Fire Night begins and Fayre is told to stay in her room. After many hours, however, she wanders outside and is surrounded by three men. She is saved by a High Fae who asks to escort her back to the party. She refuses and is found by Lucien who takes her back home. He warns her that Tamlin is not himself at the celebration due to dark magic and would have made love to her if he had found her there. They meet later that night and Tamlin, still reeling from the dark magic, bites her. Later that week, he apologizes by taking her to a weeping willow and removing all the glamours from her.

Now able to see everything, Fayre realizes that Tamlin had glamoured many of the faerie servants including Alis. The next day, she finds a head on a pike. Tamlin calls it a prank and urges her home. There, they prepare for the summer solstice. At the party, Faerie gets drunk and Tamlin takes her to see the will-o’-wisps. After the two kiss, Fayre calls it the happiest day of her life. The next day, however, a high fae named Rhysand comes to court and is able to see through Tamlin’s invisibility glamour. He asks her name and she lies, saying she is Clare Beddor. Once Rhysand leaves, Tamlin tells Fayre that she will be leaving the court.

She packs up and returns to her family who have been living with untold riches believing she was away with her rich aunt. Fayre's sister Nesta, however, had been immune to the glamour and asked Fayre to tell her the entire story. Later, after a ball held in her honor, she learns that Clare Beddor – the name she given Rhysand – has been kidnapped and her entire family burned in a house fire. Believing this to be her fault, she decides to leave for Prythian. When she gets to Tamlin’s mansion she finds it empty. While looking around, she finds Alis who tells her that Tamlin’s capture could have been avoided if Fayre had told him she loved him. Alis explains that a powerful faerie from a different realm has managed to manipulate all of the High Fae into making her the queen. Fayre decides to try and free Tamlin, who is at the court Under the Mountain.. Alis warns her against it, but finally agreed to the plan. When they get there, Alis leaves and Fayre goes inside.

Fayre is quickly captured by an Attor and brought before Queen Amarantha. The former tells the queen that she is there for Tamlin. The queen gives her two options: survive three trials to free them, or solve a riddle to instantly break the curse on Tamlin and his course. Fayre agrees to the challenges and wakes up with a broken jaw and nose in a cell a day later. Lucien heals her before the queen brings her out again. The queen gives Fayre riddle, and Fayre is returned to her cell as she tries to figure it out.

For the first trial, Fayre is placed in a giant tunnel maze with a vicious, gigantic worm. She manages to win by tricking the worm into impaling itself. She breaks her arm in the process and nearly dies of blood loss back in her cell. Rhysand appears and offers a deal: he will heal her arm if she joins him in night court one week, every month for the rest of her life. Feeling she does not have a choice, Fayre accepts. He heals her, cleans her up, and places a binding mark on her arm to prove their deal. Fayre does many impossible tasks with the secret help of other High Fae. Finally, Rhysand begins taking her to parties to show off to Tamlin. He makes her drink the wine that wipes her memory but leaves her susceptible to mind control. The second trial begins and Fayre is placed in a room with two sides and a large gate in the middle. Lucien is chained on one side and spikes are slowly descending from the ceiling. It is a riddle challenge and Fayre ccannot read. However, Rhysand’s magic leads her to the correct answer, and he encourages her to stand tall before the queen.

While in her cell, Fayre realizes that the third task will kill her as there is no way Amarantha would allow her to win. She learns that Amarantha is planning a war on humans a long with the King of Hybern, another faerie realm. Fayre slips into severe depression, but is rejuvenated by music of an unknown source. The day before the final trial, Tamlin and Fayre are able to sneak away. However, Rhysand finds them and tells Tamlin to leave. He then kisses her so that Amarantha does not notice the smeared paint on Fayre’s skin that signified someone other than Rhysand had touched her. Later, Rhysand visits her in her cell and reveals he is forced to sleep with Amarantha as punishment for his family killing Tamlin’s family. He admits he is just trying to save his home and hates relying on a human.

The final trial arrives and all of the High Fae are quiet even though they had been cheering against her in the other trials. Fayre learns she has to kill three innocent people. The first is a young boy she doesn’t know. She struggles with the task, but knows she must do it to save Tamlin and stop the blight. The second woman asks Fayre to kill her, knowing what her sacrifice will mean. The third person is Tamlin. Fayre realizes through various overheard conversations that Tamlin has a stone heart. She stabs him, and his heart saves his life. The third trial completed, Amarantha refuses to release them, saying she never said when she would release them. She begins using her magic in a rage, slamming Fayre into the ground breaking every bone in her body. While this is happening, Fayre remembers the riddle and realizes the answer is love. Amarantha breaks her back just after she solves it.

Despite Fayre's death, the curse is broken. Through the eyes of Rhysand, Fayre watches as Tamlin murders Amarantha and the other High Fae attack her various servants. With Amarantha dead, Tamlin returns to Fayre’s side. The other High Fae all give her a small piece of their magic, reviving her as a faerie. The High Fae thank her, but Fayre cannot stop thinking about the two faeries she killed. As she is getting used to her new body, she and Tamlin make love. Later, Rhysand visits and she tells him her heart is still human despite her body. Tamlin and Fayre decided to return to the Spring Court, as Amarantha's court will be destroyed.

A Court of Thorns and Roses from BookRags. (c)2022 BookRags, Inc. All rights reserved.