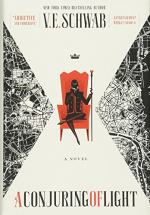 A Conjuring of Light Setting

Grey London is the world as the reader knows it. It is set in nineenth century England, when King George IV rules over the British Empire. This world has forgotten about magic but communicates with Red London occasionally through letters delivered by Kell to the Five Points tavern and to the king.

The only known magician from Grey London in Red London is Lila Bard, a pickpocket. The magical doors to Grey London that can be accessed by tokens were closed long ago; only Antari, like Kell and Lila, can travel to and from Grey London because of this.

Red London is the world of balanced magic and has the most harmonious relationship to it. The majority of the action in A Conjuring of Light takes place here in the kingdom of Arnes. It is ruled by the Maresh family, which is headed by King...