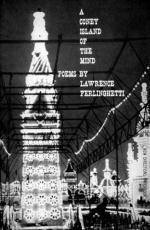 A Coney Island of the Mind, Poems Characters

Lawrence Ferlinghetti
This Study Guide consists of approximately 26 pages of chapter summaries, quotes, character analysis, themes, and more - everything you need to sharpen your knowledge of A Coney Island of the Mind, Poems.

A Coney Island of the Mind, Poems Summary & Study Guide includes comprehensive information and analysis to help you understand the book. This study guide contains the following sections:

This detailed literature summary also contains Topics for Discussion and a Free Quiz on A Coney Island of the Mind, Poems by Lawrence Ferlinghetti.

Lawrence Ferlinghettiappears in A Coney Island of the Mind, Poems

Lawrence Ferlinghetti is the poet, author, and narrator of this collection of poems. The poems reflect his opinions and beliefs about many aspects of society and the world. The title of the book is "A Coney Island of the Mind" which Ferlinghetti explains symbolizes a circus of the mind or soul, showing his frame of mind when he wrote these poems. His general tone is forlorn and pessimistic, seeming to despair of life and the current situation of the world and the people in it.

In "A Coney Island of the Mind," Ferlinghetti says that the poet is an observer who sees the surface of the world. He recalls a night where he was wowed by a dame but the next day found that she had bad teeth and hated poetry. He has not lain with Beauty but he has slept with her in his bed and spilled out poems which are her offspring. He reinvents Paradiso as a place where people are naked and there are no angels explaining the perfect monarchy and Inferno as a place without fires or altars in the sky except for the fountains of the imagination. Ferlinghetti sees the poet as an acrobat trying to catch Beauty, but he may miss her. In his dreams, he conquers all though reality continues. He questions his memory when he realizes that the fields of his memory were really streets. He falls in love for the first time in a penny candy store as his heart tells him "too soon, too soon!"

Ferlinghetti awaits a "rebirth of wonder" in the form of patriotism, religion, the secret of eternal life, the end of war, sexual discovery and great writing. He sees mankind as materialistic and wants them to renounce those instincts and live in peace. He is an American who had an unhappy childhood. Ferlinghetti was in the boy scouts and the military. He reads a lot; he has seen and experience much in his travels and his residences. He believes that humanity is amiss and sees himself as an observer. He is a self-made man who has plans for the future. He has seen goddesses and historical figures in modern events. He seeks the meaning of existence and may write an eponymous epitaph instructing the horsemen to pass.

When Ferlinghetti reads Rene Char's poetry while in Paris, he does not see the poet's dream of Lorelei on the Rhine and angels at Marseilles; he only sees nude couples in the sad water and the lasciviousness of the spring. He believes that Sorolla's illusions of love are as real as the picnickers moaning their climax. Ferlinghetti believes that the truth is not the secret of a few and that the Spiritual is best conceived in abstract terms. He thinks of New York as he reads of Yeats' Ireland. He thinks of the El and his lost book. He believes that it is "a laugh" to believe that there is a direct connection between language and reality.

Humanityappears in A Coney Island of the Mind, Poems

Although specific people are mentioned throughout Ferlinghetti's collection of poem, the majority of the characters are not specific; they are only listed as humanity in general. Using the generic sense of the people of the world, Ferlinghetti provides his thoughts on people in general in nearly every poem. He depicts people as sufferers in the world throughout the ages. He also views people as materialistic and greedy. He shows people as victims, offenders and observers. Humanity is portrayed as being hopelessly hopeful amidst the chaos or monotony of their lives.

In "A Coney Island of the Mind," humanity's sufferings have changed since Goya painted his scenes of suffering, but they still suffer, stranded across the highways of America. Survivors of war are mentioned as a condemnation of war, as the president demonstrates religion through his prayers. Religion is also demonstrated through the model of Jesus Christ on the cross. Marital discord is seen in a man and his wife's silent walk through Golden Gate Park and her depressed looks toward him. Life and mankind mimics a circus with the chaotic and animal-like actions of the people in the world. People are obsessed with sex and love, which often ruins them because they are not aware how to wade the emotions; no one even notices that love is dead. People enter a grail quest for sex, half of them not caring who they make love to while the other half thinks it the most important thing in the world. This search for sex ends in loneliness because it is purely physical satisfaction.

In "Oral Messages," the poet condemns the world as void of patriotism, religion and sexuality in its pure sense. The world is materialistic and obsessed with social status. Chaos, the end, is coming and everyone should renounce materialism and find peace. The world is just one long street with all the people of the world doing everything. Everything happens, but eventually nothing happens and there is no one there; it all ends in death.

In "Selections from Pictures of the Gone World," love can be attained easier by the young than the old because the old have ridden the train for too long and will eventually miss their turn. In Paris, reading the poetry of Rene Char, humanity is portrayed as the opposite of the poet's vision of godlike and angelic, being seen as lascivious and sad. Sorolla's illusions of love are as real as picnickers moaning their climax in their sexual obsession. The world is beautiful if you ignore the horrible things that happen, especially if those horrible things do not happen to you. Mankind is seen as indifferent to others' sufferings. Regardless of the good or bad, it ends in death. The gone faces of people in New York show their expectation that things will be different; they are disappointed. The people who think that there is a direct connection between language and reality, the world and the word are deluded. Ferlinghetti provides a grim view of humanity and their hopes.

Jesusappears in Chapter 1: A Coney Island of the Mind and Chapter 2: Oral Me

Jesus shows up real late, a carpenter from Galilee, claiming that he is the son of God who made heaven and earth. The proof is on the parchments which are around the Dead Sea which will not be found until 1947. No one believes him so they stretch them on a Tree where he hangs but does not come down. He is used as a model. Jesus climbs down from the bare tree and runs away from the materialist Christmas. He steals softly into an anonymous Mary's womb to await the Immaculate Reconception and the Second Coming.

Man and Wifeappears in Chapter 1: A Coney Island of the Mind

Miss Subways of 1957 rides the Times Square Shuttle back and forth at four a.m. She has fifty-cent size cotton plugs in her flat black nose, cut up golden arms, and a black weed in her black hand. She wears sad slacks and a matching handbag. She hands onto the iron rings with her beat black arms, a black butt in her black hand, as she rides into death and darkness.

Widder Foglianiappears in Chapter 1: A Coney Island of the Mind

The Widder Fogliani is an Italian lady of American distraction, also known as the Bella Donna. She has whiskers on her soul. The poet beat her at her own game: painting mustaches on statues in the Borghese gardens at three in the morning. She secretly gives a Christmas goose to a stray Cellini.

Chagallappears in Chapter 1: A Coney Island of the Mind

Chagall paints 'The Horse with Violin in Mouth' against his mother's admonishments. He finishes the painting, jumps on the horse and rides away, waving the violin, and gives it away, with a low bow, to the first naked nude he finds with no strings attached.

The dog trots freely and sees reality. He does not hate cops, but he has no use for them. He is not afraid of Congressman Doiyle, but he is afraid of Coif's Tower. He is sad, young, serious and democratic.

Praxitelesappears in Chapter 3: Poems from Pictures of the Gone World (1955)

Praxiteles is a sculptor of bronze trees, stone doves and lovers. He creates immortal sculptures, but he dies at twenty-eight, proving that sculpture is not for young men.

Mollyappears in Chapter 3: Poems from Pictures of the Gone World (1955)

Molly plays with the poet under the firemen's hoses. After the firemen leave, she looks at the poet and runs in, causing him to think they are the only ones there.

Sorollaappears in Chapter 3: Poems from Pictures of the Gone World (1955)

More summaries and resources for teaching or studying A Coney Island of the Mind, Poems.

A Coney Island of the Mind, Poems from BookRags. (c)2022 BookRags, Inc. All rights reserved.