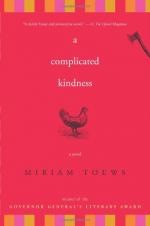 A Complicated Kindness: A Novel Topics for Discussion

Miriam Toews
This Study Guide consists of approximately 46 pages of chapter summaries, quotes, character analysis, themes, and more - everything you need to sharpen your knowledge of A Complicated Kindness.

What does Nomi mean when she says that she has trouble with endings? Do any other characters in the book have problems with endings?

What do you think happened to Nomi's mother?

Describe the relationship between Trudie and her brother.

Why is Nomi's father getting rid of their furniture? What does this symbolize? Why is it significant that their couch winds up in The Golden Comb's trailer?

Discuss the differences between the religious persecution in Russia and that in the East Village.

Compare and contrast Tash's rebellion with that of Nomi's.

What is significant about Ray's obsession with making order out of disorder? Why does he clean up the dump? Why is he obsessed with chemicals that must decay in order to become more stable?

What is the significance of Edwina McGillivray? What is her role in...

More summaries and resources for teaching or studying A Complicated Kindness: A Novel.

A Complicated Kindness: A Novel from BookRags. (c)2022 BookRags, Inc. All rights reserved.