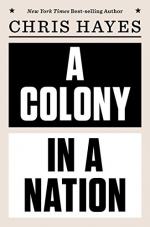 A Colony in a Nation Summary & Study Guide

Hayes, Chris
This Study Guide consists of approximately 37 pages of chapter summaries, quotes, character analysis, themes, and more - everything you need to sharpen your knowledge of A Colony in a Nation.

A Colony in a Nation Summary & Study Guide Description

A Colony in a Nation Summary & Study Guide includes comprehensive information and analysis to help you understand the book. This study guide contains the following sections:

This detailed literature summary also contains Topics for Discussion on A Colony in a Nation by Hayes, Chris .

The following version of this book was used to create this study guide: Hayes, Chris. A Colony in a Nation. W.W. Norton & Company, 2017.

A Colony in a Nation by Chris Hayes is a work of nonfiction about racial inequalities in the American criminal justice system. Hayes argues that the United States is comprised of two separate societies, the Nation and the Colony. The Nation is inhabited primarily by white Americans who enjoy the full benefits of citizenship and civil rights. They control the political system and can expect that law enforcement will provide safety and order without infringing on their rights. The Colony, in contrast, is inhabited primarily by black and other minority Americans. Those residents of the Colony are integrated into the country’s political system, they lack real control and cannot be considered full citizens. As a result, the Nation creates and enforces laws on the Colony without its residents’ consent. This relationship is analogous to that created by more traditional colonialism in which a major power controls a foreign country and its population. The Nation receives tangible benefits from the relationship and justifies its oppressive legal system by citing a need to control the Colony’s population.

While advancing this primary thesis, Hayes explores of number of related ideas. A major focus of the book is the idea of white fear. Throughout American history, Hayes argues, whites have feared violence from Native Americans and blacks and thus created system to control minority groups. He relates this idea to both devaluation of black lives and white privilege. A third major theme is the punitive nature of American culture. Hayes argues that this impulse goes beyond racial attitudes and encourages society to seek the strongest possible punishment for perceived criminals. Throughout the book, Hayes draws examples from his own experience as well as those of various associates. He also cites various events that he covered as a reporter for MSNBC, most notably the shooting of Michael Brown and its aftermath in Ferguson, MO.

More summaries and resources for teaching or studying A Colony in a Nation.

A Colony in a Nation from BookRags. (c)2022 BookRags, Inc. All rights reserved.