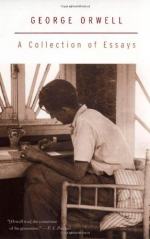 +Chapters Summary and Analysis
Such, Such Were the Joys. . .
Charles Dickens
The Art of Donald McGill
Rudyard Kipling
Raffles and Miss Blandish
Shooting an Elephant
Politics and the English Language
Reflections on Gandhi
Marrakech
Looking Back on the Spanish War
Inside the Whale
England Your England
Boys' Weeklies
Why I Write
Free Quiz
Characters
Objects/Places
Themes
Style
Quotes
Topics for Discussion
Order our A Collection of Essays Study Guide

A Collection of Essays Topics for Discussion

George Orwell
This Study Guide consists of approximately 50 pages of chapter summaries, quotes, character analysis, themes, and more - everything you need to sharpen your knowledge of A Collection of Essays.

Orwell's early school days are described as remarkably distasteful. Discuss your own experiences in primary education - were they as awful as Orwell's? How is contemporary public education different today from the public education of the early 1900s?

Charles Dickens remains one of the most respected and widely read authors of all time. Which Dickens novels have you read? Did you consider them enjoyable and insightful? Did you find Dickens difficult to read?

Orwell describes a category of comic postcards that he states are obscene and vulgar. What is the difference between obscenity and vulgarity? Do such postcards exist today? Where could you purchase a newly printed postcard that is simultaneously funny, vulgar, and obscene?

Like Sherlock Holmes, A.J. Raffles was a character in early British detective novels. Today the Sherlock Holmes novels enjoy wide circulation in the United States of America while...

More summaries and resources for teaching or studying A Collection of Essays.

A Collection of Essays from BookRags. (c)2021 BookRags, Inc. All rights reserved.