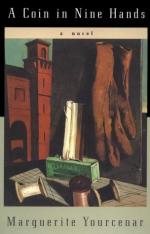 Marguerite Yourcenar
This Study Guide consists of approximately 33 pages of chapter summaries, quotes, character analysis, themes, and more - everything you need to sharpen your knowledge of A Coin in Nine Hands.

A Coin in Nine Hands Summary & Study Guide includes comprehensive information and analysis to help you understand the book. This study guide contains the following sections:

This detailed literature summary also contains Topics for Discussion on A Coin in Nine Hands by Marguerite Yourcenar.

A Coin in Nine Hands is a collection of stories about nine people who are connected by a ten lira coin that passes into various hands. In addition to the coin, each of the lives are connected by similar themes of death, loneliness and love. As this coin passes from one person to the next, detailed stories of the character holding the coin unfold. In addition to the stories revealed, there is a greater story affecting everyone to varying degrees. There is a strong sense of politics at play with the Italians under Fascist rule. The characters have differing views on their current dictator ranging from apathetic to supportive to outright rebellious. It is this rebellious aspect that brings significant action into play as an assassination attempt on the dictator stirs up many emotions.

The first main character in the story is Lina Chiari, a prostitute in Rome who is dying of breast cancer. Living in denial with her illness, she forces herself to face her own mortality as she reveals her disease. She is poor and lives a simple life, doing what she can to get by. Concerned with appearances, she either dresses up for her clients - or modestly for the doctor. Eager to go to her death revealing nothing to others, she buys a tube of lipstick to put her game face back on. Giulio Lovisi, an unhappily married cosmetic shop owner, also puts on an act of contrition as he goes to church to pray, though he prays for an end to his sad existence with his resentful wife and abandoned daughter and grandchild. He dreams of elaborate ways to escape his situation, though he knows it is fruitless.

Rosalia di Credo, who is dedicated to her family, is also fiercely dedicated to Gemara, the place of her wonderful childhood in Sicily. She sacrifices her own happiness to care for her ailing father, Ruggero, and wayward sister, Angiola. After a string of failed relationships, Angiola finally agrees to settle down in a normal life with Paolo Farina. Quickly bored with this predictable life, she takes off with another lover and leaves town. Once the marriage ends, Paolo refuses to continue mortgage payments on Gemara and lets it be sold at public auction. This is too much for Rosalia to bear, so she commits suicide.

Marcella, a former nurse who is now a political activist, reveals her plans to assassinate the dictator. Neither her friend, Massimo, nor her former husband, Alessandro, believes she will carry out the plans. Alessandro and Marcella admit they still love each other and acknowledge that it is only because of their political differences that they parted ways. It is Alessandro who breaks the news of Carlo Stevo's death, a fellow political rebel and friend. Determined to make an impact, Marcella embraces her destiny and fulfills her plan, although she is not successful. She is caught and beaten to death.

With the excitement in the area, Mother Dida an old lady who sells flowers, is required to spend the night sleeping outside. Although she has enough money to take a cab if she wishes, she does not want her family to know she has any money, so instead, she hoards her money. While she is preparing to end her night, she encounters the French painter, Clement Roux, who she mistakes as a beggar. He is in ailing condition because his heart is ready to give out. Clement encounters Massimo, who has come from the plaza where the assassination attempt just took place. Massimo finds a taxi for the dying painter and goes home for the night.

More summaries and resources for teaching or studying A Coin in Nine Hands.

A Coin in Nine Hands from Gale. ©2005-2006 Thomson Gale, a part of the Thomson Corporation. All rights reserved.