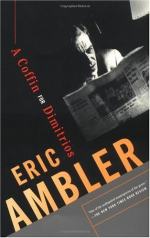 Peters explains that he suspected Dimitrios faked his death, and Latimer is important because he has seen Visser's body and can identify it. The French identity card would be easily faked. Peters continues his story.

After getting out of jail, Peters goes abroad. He meets Visser some time later, in Rome. Visser asks him for money, telling Peters his story. Visser and Dimitrios had clashed during the meetings of the drug-smuggling ring. Visser distrusted Dimitrios and followed him, finding an apartment, where he lived under the name Rougemont. He also found a house belonging to a high-class woman Dimitrios was involved with, whom Peters calls la Comtesse. After getting out of jail, Visser wanted to kill Dimitrios. Then, he thought of blackmail.

Visser tracked Dimitrios to a drug-cure clinic, and then, Visser broke into la Comtesse's house...

A Coffin for Dimitrios from BookRags. (c)2022 BookRags, Inc. All rights reserved.