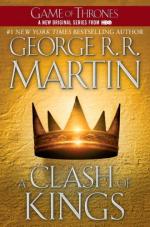 George R. R. Martin
This Study Guide consists of approximately 113 pages of chapter summaries, quotes, character analysis, themes, and more - everything you need to sharpen your knowledge of A Clash of Kings.

A Clash of Kings Summary & Study Guide includes comprehensive information and analysis to help you understand the book. This study guide contains the following sections:

This detailed literature summary also contains Topics for Discussion and a Free Quiz on A Clash of Kings by George R. R. Martin.

A Clash of Kings is a fantasy novel by George R.R. Martin, which concerns the struggle for the throne of the Seven Kingdoms. There are several claimants to the throne, including Joffrey Baratheon, the current king, Stannis Baratheon, Renly Baratheon, Robb Stark, Daenerys Targaryen, and Balon Greyjoy. At the beginning, a red comet has appeared in the sky, and no one knows quite what to make of it. Cressen is an advisor to Stannis, who has now been taking advice from Melisandre. She wants Stannis to kill his brother, Renly Baratheon, so Stannis can take the throne. Cressen is shocked at this and tries to poison her. They drink from the same cup, and Cressen dies while Melisandre's amulet protects her.

A man named Yoren helps Arya Stark escape from King's Landing after her father, Eddard Stark, is executed. He plans to take her home. Sansa Stark, Arya's sister, is still at King's Landing. Tyrion Lannister, King Joffrey Baratheon's uncle, comes in and produces a note from his father, Tywin Lannister, proclaiming Tyrion to be the adviser of the king until Tywin can be there. His sister, Cersei Lannister, is angry, but Tyrion says he will get Jaime Lannister, their brother and Cersei's lover, back from the Starks. Tyrion lets her know he knows her children were not Robert Baratheon's, but Jaime's. Bran Stark, Robb Stark's brother, is at Winterfell, out of harm's way, while Robb and their mother, Catelyn, are at Riverrun and are planning where to strike next. Several city watch members meet Arya's group and try to take her friend, Gendry, who is one of the bastards of Robert Baratheon. Yoren runs them off, but they have to flee quickly before the city watch comes back.

Jon Snow, Robb Stark's illegitimate brother, is a member of the Night's Watch, who guard the Wall to the north. Catelyn and Robb Stark are discussing terms of peace to be delivered to the Lannisters. Catelyn wants to get her daughters, Arya and Sansa, back. Robb sends Theon Greyjoy to Theon's father, Balon Greyjoy, to send a message asking him to ally with Robb. Tyrion Lannister sends Ser Jonas Slynt to the Night's Watch as punishment and appoints Ser Jacelyn Bywater in his place as commander of the city watch. Stannis Baratheon prepares a letter that will stake his claim as king and reveal Cersei's children as bastards. Melisandre proclaims Stannis a legendary hero reborn. Theon Greyjoy goes to see his father, Balon, with a message from Robb to declare peace. Balon is not happy his son is supporting Robb and rejects the message.

Daenerys Targaryen is leading her people through a desert on the continent. They have few supplies, and people are dying. They find the city of Quarth. Jon Snow and the other Night's Watch rangers find an empty wilding village and don't know what to make of it. The wildings are a free people who live north of the Wall which separates the Seven Kingdoms from the wild north. Arya Stark and her group come to a river, but they can't find a boat. They stop in a town. During the night, they are raided by Ser Amory Lorch. Arya helps the other children get away. She gives three prisoners an ax to get out of the wagon in which they are locked. Cersei Lannister gets the letter claiming her children as bastards, and she is furious. Tyrion has the armorers begin work on a large chain. Tyrion tells three men, Pycelle, Petyr, and Varys, differing stories about where he plans to send Cersei's children in order to find out which of them is a spy for her. Sansa receives a note from Ser Dontos, who tells her he can help her escape King's Landing and get back to his family.

Arya Stark, Gendry, and the other orphans run into Gregory Clegane, an ally of the Lannisters. Tyrion receives the terms of peace that Robb Stark has sent. He won't agree to them, but says they are a good start. Cersei comes to him, mad that he wants to send her daughter Myrcella to Prince Doran Martell. Tyrion now knows Pycelle is a spy for Cersei. Bran Stark meets Meera and Jojen Reed, a brother and sister who know about his connection with a direwolf. Catelyn Stark goes to meet with Renly Baratheon. Renly wants Robb to swear loyalty to him and help him defeat the Lannisters. Stannis Baratheon begins to attack Storm's End, a holdfast of Renly's. Jon Snow and the other rangers find more deserted wilding villages. They stop at Craster's Keep to rest, and Craster tells them the wildings are gathering in the mountains to attack the wall.

Theon meets his sister, Asha, at the docks, and she mocks him for being out of touch with their way of life. Balon Greyjoy has Asha and Theon invade several forts that the Starks hold. Tyrion Lannister meets with Ser Cleos Frey to get Robb Stark's peace terms. He sends Ser Cleos back with terms of his own. Arya Stark is forced to work as a servant at Harrenhal by Ser Gregor Clegane. Daenerys Targaryen arrves in Qarth, where she debates how to get an army and ships. Jojen Stark tells Bran how he has prophetic dreams. He says Bran must seek out a three-eyed crow in the north. Meera tells Bran about one of Jojen's dreams, so when it comes true he will know Jojen is telling the truth. Tyrion blackmails Ser Lancel to spy on Cersei for him. At Harrenhal, Arya Stark meets Jaqen, one of the prisoners she freed. Jaqen tells her she may name three people to die in return for saving him and the other two prisoners. She has him kill Chiswyck.

Catelyn Stark is meeting with Renly and Stannis Baratheon. They plan to battle the next morning. King Joffrey beats Sansa, since her brother, Robb, won a battle against the Lannisters. Renly is getting prepared for the battle when a shadow enters the tent and slits his throat. Brienne is blamed, but Catelyn clears her and the two women flee. In the north, the Night's Watch group arrives at the Fist of the First Men. Bran learns that Jojen's dreams are real. Jojen says he sees Bran and his brother Rickon lying dead with skinned faces. Tyrion sends envoys to recruit Renly's followers. Theon Greyjoy plots to capture Winterfell. Arya has Jaqen kill a steward at Harrenhal. Catelyn returns to Riverrun with Brienne. Her brother, Edmure, is preparing to attack Tywin Lannister's army. Daenerys can't find assistance in Qarth, but plans to visit the warlocks, a group of magic workers, before she leaves.

Tyrion watches as his niece, Myrcella, is sent to Dorne on a ship. When the court returns to the castle, a riot breaks out. Ser Davos is at Storm's End, where Stannis is besieging the castle. Stannis sends Melisandre to create a shadow to kill the commander of the castle. Jon Snow is sent out with a small party to investigate what the wildings are doing. Catelyn goes to interrogate Ser Cleos and learns about Tyrion's peace terms. Bran Stark wakes up and learns Theon Greyjoy has captured Winterfell. At Harrenhal, a group of northmen loyal to Arya's brother Robb are brought in as prisoners. Arya gets Jaqen to help her free them. When they free them, they learn the northmen are there as part of a plot to take the castle from Ser Gregor Clegane and the Lannister men. Daenerys visits the House of the Undying, where she sees many visions of past and future events. She takes one of her dragons, who helps her escape from the house by burning it down.

Tyrion has his alchemists prepare wildfire in case King's Landing is attacked. Bran, Rickon, Jojen, Osha and Meera escape from Winterfell. Theon tries to track them down. Jon Snow and his party capture a wilding woman, who tells them the wildings are looking for something in the mountains to help them breach the Wall. They let her go, but soon their position is revealed and they flee back to the fort. Catelyn interrogates Jaime Lannister, Tyrion's brother. He admits he is the father of his sister Cersei's children. He mocks Catelyn, who asks Brienne for her sword. Theon Greyjoy shows the people of Winterfell the bodies of Bran and Rickon, although he actually killed two other boys. Stannis' army begins to attack King's Landing.

Ser Davos is commanding Stannis' fleet. The fleet is winning the battle when Davos notices a Lannister boat leaking wildfire. Another ship hits it and the wildfire explodes. Davos is thrown overboard and drifts out to sea while his fleet is destroyed. Tyrion is pleased his plan with the wildfire worked. Some of Stannis' army is preparing to break down the city gate. Tyrion leads the men out to stop them. The attack succeeds, but Tyrion is wounded when one of his men turns on him. The Lannister army successfully repels Stannis and his forces. Daenerys is trying to find a ship. She is met by two men sent from Pentos to bring her there, and she agrees to go. Arya Stark escapes from Harrenhal. She wants to get back to her family at Riverrun.

Joffrey meets with the court to reward the heroes of the war and punish the prisoners. He decides to marry Margaery Tyrell instead of Sansa, which makes Sansa very happy. Ser Dontos tells her she will be able to escape back to her home in Riverrun on Joffrey's wedding day. Theon is at Winterfell, but his castle is invaded by Ramsey Snow, who kill all his men and burn the castle. Jon Snow's party is caught by the wildings. He pretends to join them in order to spy on them for the Night's Watch. Bran, Rickon, Meera, Jojen, and Osha emerge from the crypts at Winterfell and see everything is destroyed. Osha takes Rickon and Bran; Meera, and Jojen go north to search for the three-eyed crow.

A Clash of Kings from BookRags. (c)2022 BookRags, Inc. All rights reserved.