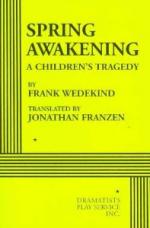 This detailed literature summary also contains Topics for Discussion and a Free Quiz on A Children's Tragedy by Frank Wedekind.

Wedekind's play is a coming-of-age story of adolescent turmoil. Melchior, a young man wrestling with philosophical questions of morality, rapes his neighbor, Wendla, in a moment of passion, impregnating her. Meanwhile, Melchior's best friend, Moritz, shoots himself because he is going to be held back at school. Melchior is held responsible for Moritz's suicide, expelled from school, and sent to a reformatory. Wendla dies after Wendla's mother gives her abortion pills. Melchior escapes from the reformatory, and finding Wendla dead, he considers suicide. A mysterious masked man appears, though, to lead Melchior on into life.

As the story begins, a group of adolescents are becoming adults. Wendla, at 14, is starting to get voluptuous, but she still wants to wear her little-girl dress. Moritz, a young boy, is starting to have sexual feelings, but he doesn't know anything about sex and asks his friend Melchior to write down an explanation of where babies come from. Moritz is concerned that he will not pass his grade level, and he considers shooting himself if he fails. Meanwhile, Melchior and Wendla are attracted to each other.

Moritz is struggling to try to pass his grade at school, and he considers killing himself if he can't pass. As it becomes clear that he's not going to pass, he writes to Melchior's mother to ask for money to flee to America, but she won't give it to him. Moritz finally shoots himself rather than face his parents' reaction to his failure.

Wendla comes across Melchior in a hayloft one day, and Melchior is overcome with passion. He begins to kiss Wendla, and over her protests, he has sex with her. Wendla, afterwards, is ecstatic, walking on air. She doesn't realize the full significance of what's happened because her mother hasn't explained to her fully about sex. She doesn't even realize that she's pregnant. Meanwhile, the headmasters of Melchior's school find the explanation of sex that Melchior wrote for Moritz and expel Melchoior.

Because of Melchior's expulsion and Wendla's pregnancy, Melchior's parents send him away to a reformatory. The other boys there play sexual games, and Melchior plans to escape. While he's at the reformatory, though, Wendla's mother gives Wendla abortion pills, which kill her. When Melchior escapes from the reformatory, he goes to the graveyard to see Wendla's tombstone.

Melchior feels responsible for Wendla's death and considers killing himself. At the graveyard, he sees the ghost of Moritz, who tries to convince Melchior to commit suicide. However, Melchior meets a mysterious masked man who convinces Melchior that life is better than death. Melchior finally leaves the graveyard, having survived adolescence and heading for his manhood.