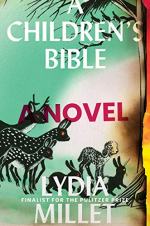 Get A Children’s Bible from Amazon.com
View the Study Pack
View the Lesson Plans
Study Guide
Order our A Childrens Bible Study Guide

Lydia Millet
This Study Guide consists of approximately 35 pages of chapter summaries, quotes, character analysis, themes, and more - everything you need to sharpen your knowledge of A Children’s Bible.

The novel begins at a large rental house in a wealthy, semi-rural area. The geographical location is never stated, but the novel hints that it is somewhere relatively near New York City, and close to the Appalachian Trail. The parents spend their time in the house in carefree revelry, while the kids attempt to distance themselves. They even decide to live outdoors for a few days.

In the days leading up to the storm, Jack and Shel capture animals and store them in a tree house. As the storm strikes, Jack handcuffs himself to the tree house so that he can remain there and protect the animals, Evie and some of the other teens join Jack in order to help keep him safe during the storm.

After the teenagers meet James, he invites them to a party on his family’s yacht. The teenagers accept...