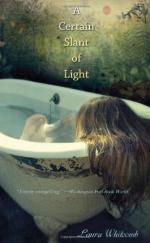 Laura Whitcomb
This Study Guide consists of approximately 35 pages of chapter summaries, quotes, character analysis, themes, and more - everything you need to sharpen your knowledge of A Certain Slant of Light.

A Certain Slant of Light Summary & Study Guide includes comprehensive information and analysis to help you understand the book. This study guide contains the following sections:

This detailed literature summary also contains Topics for Discussion and a Free Quiz on A Certain Slant of Light by Laura Whitcomb.

A Certain Slant of Light by Laura Whitcomb tells the story of a ghost named Helen. Stuck between life and death, she clings to her hosts and immerses herself in literature until one day she discovers that a student can see her. The two bond, and Helen learns there is a lot more to life than what she knows of death.

Helen has been dead for over 100 years, but she doesn't remember much about her life before death. She isn't certain what she did that kept her from heaven. All she knows is that after she died, she heard a woman reading poetry, grasped onto the woman's skirts, and was pulled out of her grave, unbeknownst to the woman. Helen stays with her host until her host dies, and when she feels herself slipping back into the icy clutch of her grave, she latches on to a new host. As this book begins, she is on her fifth host, and all of her hosts are involved with literature as poets, writers, and playwrights. Her current host is a teacher, and to Helen's great shock, she realizes that one of his students can see her.

The boy who can see her is named James. He sees her because he, too, is a spirit. He has taken over the body of a boy who wanted to leave his body empty. James and Helen get to know each other, and James helps Helen find a body that she can occupy. She enters the body of a girl named Jenny.

Jenny is from a strictly religious family. Her parents present the perfect picture, and she is given everything she needs in regards to food, clothes, and housing. However, her life is regimented and she isn't allowed personal expression. If she challenges anything her parents say, she is sent to her room and told to pray.

Living in someone else's body has its own challenges, and Helen tries to get used to life as Jenny. James helps her, and the two become even closer. Their closeness leads to sexual intimacy, which seems very right to them. James and Helen talk together about their lives, and they discuss memories. Helen is getting more glimpses at her past now that she is in Jenny's body.

The household James now lives in is harsh. His brother is always swearing at him, bringing his girlfriend around, and hits him. Jenny finds that her household is cold and rigid. In spite of all the praying and religious talk, there are serious underlying issues. Cathy is unhappy, and Dan leaves the house, coming home smelling like gardenias.

Helen is with James when he finally has the memory of the time of his death. He realizes that he has been holding himself responsible for something that was out of his control. Once he realizes this, he is no longer tethered to the earth. Both he and Helen realize that they need to give the bodies they are using back to the original owners. James moves on, and Helen figures out her own path to salvation, joining her loved ones.

More summaries and resources for teaching or studying A Certain Slant of Light.

A Certain Slant of Light from BookRags. (c)2022 BookRags, Inc. All rights reserved.