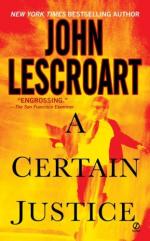 John Lescroart
This Study Guide consists of approximately 60 pages of chapter summaries, quotes, character analysis, themes, and more - everything you need to sharpen your knowledge of A Certain Justice.

This detailed literature summary also contains Topics for Discussion on A Certain Justice by John Lescroart.

A Certain Justice by John Lescroart is a gripping drama and murder mystery based on real life. It is a story about racial tensions, riots, murders, and political intrigue that offers surprises right up until the very last chapter. Lieutenant Abraham Glitsky heads the homicide detail in San Francisco. An honest and moral mulatto man, Abe has interest only in justice. Unfortunately, there are many pitfalls on the road to justice. They include insufficient or confusing evidence, multiple suspects, back room political agendas, and public pressure to resolve high profile cases. The first of these cases that Glitsky takes on involves the murder of Michael Mullen who was killed strictly for his car. Suspect Jerohm Reese is quickly found and arrested. However since there is not sufficient evidence proving Reese's guilt, District Attorney Chris Locke is forced to set him free. This sets off a chain of events that no one could have anticipated.

During the wake for Michael held at the Cavern Pub by his friend Jamie O'Toole, a car alarm is heard outside. The largely Irish Catholic group goes out to investigate shortly after learning of Jerohm's release on the news. They find Arthur Wade, an African American resident standing outside his BMW, having locked his keys in the ignition accidentally. The group jumps to the conclusion that Wade was breaking in to steal the car. A that mob mentality takes over, and before common sense can reassert itself, the hardware store next door has been relieved of a rope, and Arthur is being strung up with it. One man tries to come to his rescue. A young man by the name of Kevin Shea is in the Cavern Pub when the commotion begins. By the time he gets outside, all reason has left the crowd, and Arthur is in a fight for his life. Kevin fights his way to him, holding his legs up with all his strength and handing him a pocket knife to free himself, but he is only one man, and the mob is determined. Kevin gets knocked out. When Kevin awakens, Arthur is dead, lynched in the street, and the mob is gone.

The next day a photograph is aired that shows Kevin with his arms around Arthur's legs, but the caption does not depict him as a hero. Instead, the story has him pegged as the ringleader, hanging onto Arthur's legs to facilitate strangling him. What follows is a manhunt for Kevin that is unrelenting. Riots between races break out in the normally peaceful streets and both sides are screaming for justice. Senator Loretta Wager knows an opportunity when she sees one. She uses the situation to raise her public profile, calling for justice and Kevin Shea's head. Making back room deals with African American leader, Philip Mohandas, she works her way up the political food chain. When touring the area with D.A. Chris Locke, they become embroiled in a riot-stricken area and Locke is assassinated. Loretta is unharmed, and her profile increases.

Glitsky and Wager have a history as a couple many years ago, and rekindle that relationship. It is not too long however before Abe begins to wonder if Loretta is entirely forthcoming. When it begins to appear that Kevin is innocent, and Loretta uses all of her political power to keep that a secret in order to further her own agenda, Abe has to think quickly. He realizes her ambition and that he has to respond fast or he will be swept to the side as she makes her way to the Oval Office ahead of him. In an explosive ending, Abe realizes Loretta is guilty of Chris Locke's murder, and Loretta's daughter Elaine is actually his child. The book is action-filled and a page turner right to the very end.

More summaries and resources for teaching or studying A Certain Justice.