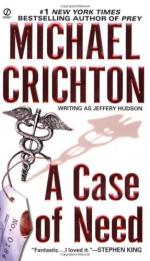 Michael Crichton
This Study Guide consists of approximately 35 pages of chapter summaries, quotes, character analysis, themes, and more - everything you need to sharpen your knowledge of A Case of Need.

A Case of Need Summary & Study Guide includes comprehensive information and analysis to help you understand the book. This study guide contains the following sections:

This detailed literature summary also contains Topics for Discussion and a Free Quiz on A Case of Need by Michael Crichton.

John Berry is in the pathology lab when Frank Conway enters, throwing a tantrum over having lost a patient on the operating table. John accepts the theatrics as typical and is soon called to the telephone where his wife, Judith, says that their friend and John's co-worker, Art Lee, has been arrested. Art performs abortions and John, along with his superior in the pathology lab, Dr. Sanderson, helps cover up the results. John goes to the police station, presents himself as an attorney and gains admittance to Art's cell. Art says that he's been accused of having performed an abortion on a young girl, Karen Randall, who is the daughter of an influential medical family. Karen died as the result of a mistake during the procedure. Because abortion is illegal, Art is being charged with murder - having caused the death of another while committing a felony. Art says he didn't do it. John believes him and sets out to prove his innocence.

John learns that Karen was a promiscuous young woman who had earned the reputation for being wild. John sets out to discover who really performed Karen's abortion, knowing that to be the only way to prove Art's innocence. He soon learns that Karen wasn't pregnant at the time of this procedure. While that doesn't prove Art's innocence, it does indicate sloppy work because John believes any competent doctor would have first performed a pregnancy test.

George Wilson, a young black attorney, takes Art's case because he knows a win will make his career. He intends to win at all costs, though John's sole objective is to avoid a trial. The two men watch as Peter Randall - Karen's uncle, and the other possible abortionist, sets fire to his own car and shoves it over a cliff to hide the fact that Karen's blood has soaked the seats. Peter later admits that he had refused to perform the abortion, figuring that Karen actually wanted the shame of an illegitimate birth and that she'd had his car when she apparently went to find someone else to perform the procedure.

What John eventually learns is that Karen had rough friends, including a drug dealer named Roman who is part of a band, and a drug-addicted nurse named Angela. Roman wants money and convinces Angela to perform the abortion for three hundred dollars. Angela says that Karen seemed fine when she left Angela's apartment where the procedure was performed. Her stepmother admits that she named Art Lee as the abortionist because Art had performed one for her when she became pregnant with the illegitimate child of her brother-in-law, Karen's uncle, Peter Randall. To further complicate the issue, the pathologist who performed the autopsy on Karen is Leland Weston, Angela's uncle.

When Roman realizes he has come under scrutiny, he attacks Angela. Weston happens to arrive at her apartment as the attack is in progress and she covers up his role in the death of Roman just before she slashes her own wrists. In the hospital, Angela admits her part in the death of Karen and later Weston admits his own to John.

More summaries and resources for teaching or studying A Case of Need.

A Case of Need from BookRags. (c)2022 BookRags, Inc. All rights reserved.