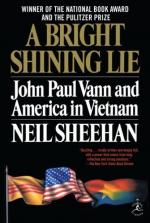 Neil Sheehan
This Study Guide consists of approximately 93 pages of chapter summaries, quotes, character analysis, themes, and more - everything you need to sharpen your knowledge of A Bright Shining Lie.

This detailed literature summary also contains Topics for Discussion and a Free Quiz on A Bright Shining Lie: John Paul Vann and America in Vietnam by Neil Sheehan.

A Bright Shining Lie was part biography of John Paul Vann, part history lesson of the Vietnam War, and part personal memoir for Neil Sheehan. The book began at the funeral of John Paul Vann, a former Army lieutenant colonel who served in both Korea and Vietnam before his retirement in 1963. At the funeral, the reader was introduced to many of Vann's contemporaries, including some important political figures of the time the reader was sure to recognize.

The next part of the book, Going to War, covers the first year Vann served in Vietnam. Vann was an American advisor assigned to a Southern Vietnamese regiment. He spent this first year organizing and planning many assaults on the Viet Cong, fighting alongside Vietnamese soldiers in each assault. During this time, Vann saw many things that caused him great concern. Vann was concerned that the ARVN, the Army of the Republic of Vietnam, was afraid to go into battle and risk creating casualties. Van also discovered many incidents of torture and murder that were unjustified and bombings of civilian homes that were unwarranted. Vann took his concerns to his superiors and was not heard.

The third part of the book, Antecedents to a Confrontation, took the reader into the past and explained the reasons for the conflict in Vietnam. In this section, Sheehan told the reader who Ho Chi Minh and Diem were and why they both were on the paths they traveled during the Vietnam War. He also told the reader about the war between the French and the Vietnamese and how the Americans got involved in the fight.

The next section, The Battle of Ap Bac, told of one of the first major battles of the conflict that Americans were involved in. Ap Bac was a small hamlet near a Viet Cong base. Vann and his 7th Division were sent there to capture a radio tower the Viet Cong had set up. This battle went wrong from the very first moment and continued to go wrong throughout that day and the next. Vann became so incensed by the actions of his Vietnamese counterpart that he pulled a few reporters aside, including the author of this book, and told them about the many mistakes that had been made.

In Taking on the System, Vann found himself transferred to the Pentagon after his tour of duty in Vietnam. There Vann took it upon himself to brief anyone he could on the things he had seen in Vietnam and his views on how the war could best be won. Vann was prevented from briefing the Joint Chiefs by a general on the council who did not like Vann's views. Vann would retire from the Army later that year.

Antecedents to the Man dealt with Vann's life before he arrived in Vietnam. Vann was a child of the Depression, born to a self-centered woman who often neglected and emotionally abused her children. Vann was saved from this life by a kindly Methodist minister who arranged for him to go to a boarding school. Later Vann joined the Army Air Corps with hoping to become a pilot. During his training, he met his wife. From there, Vann enjoyed a busy and satisfying career in the Army that eventually led to his time in Vietnam.

The next section, A Second Time Around, covered Vann's return to Vietnam as a civilian working with the pacification group AID, or Agency for International Development. Vann did not do well in civilian life and could not let go of his opinions regarding Vietnam. Once back in Vietnam, Vann did all he could to rise in the ranks of AID and put himself in a position to take command of a battalion, the one thing he had always wanted.

Finally, John Vann Stays told how Vann found his desires fulfilled. Months before his death, he was given a position of command over II Corps through his civilian agency. Vann fought his final battles with his notable grace and daring. Despite destruction in his personal life, Vann finally had everything he had wanted in his professional life. However, he slowly realized that the Americans had lost the war in Vietnam.