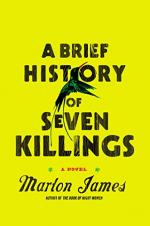 The events of the December 1976 sections of the novel as well as the February 1979 section take place in the island nation of Jamaica located in the Caribbean Sea.

Havendale is the part of Jamaica from which Nina Burgess came. She described it as neither the ghetto nor uptown, just the middle.

The Skyline is the hotel where Alex Pierce stayed while he was in Jamaica. It was at the Skyline that Alex was staying the day that Tony Pavarotti came to kill him.

Balaclava is the name of the ghetto bulldozed to give birth to Copenhagen City. Papa-Lo admits that he had been in favor of the destruction of Balaclava, where people could be killed by drinking the water, but was...