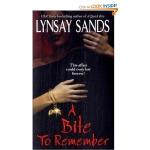 Lynsay Sands
This Study Guide consists of approximately 41 pages of chapter summaries, quotes, character analysis, themes, and more - everything you need to sharpen your knowledge of A Bite to Remember.

A Bite to Remember Summary & Study Guide includes comprehensive information and analysis to help you understand the book. This study guide contains the following sections:

This detailed literature summary also contains Topics for Discussion on A Bite to Remember by Lynsay Sands.

Vincent Argeneau is the head of V.A. Productions and hires Jackie Morrisey, a private investigator, to help him find the saboteur trying to destroy his company. Though Jackie and Vincent get of to a rough start, the attraction between the two grows and intensifies with every day that they spend together. Jackie does not trust immortals and knows that the last thing she needs to do is get involved with another vampire.

Jackie and her assistant Tiny stay with Vincent as they try and track down the culprit behind the mysterious accidents that have been happening on the sets of his plays. Jackie is nervous that the saboteur wants to hurt Vincent so the first thing they do is secure Vincent's home. Jackie immediately get an employee list from Vincent's office. Jackie finds suspicious letters in Vincent's mail and it becomes obvious that the saboteur is real and wants to harm Vincent. Shortly after the letters are discovered, the house gets broken into and the employee list is stolen. A few days later, they find the mortal vice president of the company, Stephano, stabbed in the chest in his office. Without thinking, Vincent turns him in an effort to save Stephano's life. They sneak Stephano to Vincent's house so that he may recover there without the saboteur knowing that he survived. They are hoping that Stephano caught a glimpse of the saboteur and will remember when he wakes up. Jackie and Marguerite realize that Vincent sacrificed his once in a lifetime chance to turn a human to turn his vice president. Immortals usually use their one chance to turn on their life mate if they are human.

Since the saboteur keeps harming those around Vincent, Jackie and Vincent spend more time together working on the case. As such, they start to develop a relationship and Marguerite recognizes that Jackie and Vincent are life partners. Marguerite tells Vincent and he opens up to the possibility that they may be destined to be together. Although Jackie starts to develop feelings for Vincent, she has to keep reminding herself that immortals are all the same, just like her ex Cassius.

Jackie unexpectedly runs into the saboteur and chases him only to end up in a struggle with him. The saboteur then sucks her blood out and tries to kill her and Jackie ends up biting the saboteur in an effort to get him to drop his knife which he was going to stab Vincent with. Consequently, Jackie swallows the saboteur's blood and is unintentionally turned. During this turning it becomes clear that Vincent is in love with her and she is with him.

Finally, the saboteur kidnaps Jackie. It becomes apparent that it was Vincent's production assistant who was trying to seek revenge against Vincent's father who killed her life mate William. William was a pedophile who turned Lily when she was twelve in an effort to keep her looking like a child and control her. While contrasting William with Vincent, Jackie is able to see that she loves Vincent and Vincent loves her. They both accept each other as partners and start planning the rest of their lives being with each other for eternity.

More summaries and resources for teaching or studying A Bite to Remember.

A Bite to Remember from BookRags. (c)2022 BookRags, Inc. All rights reserved.