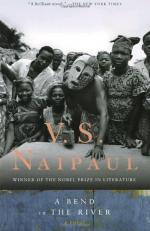 It is the first time Salim has flown in an airplane, and he is amazed. He is in Africa one day and in Europe the next morning. He finds that the Europe he comes to is not the Europe he had heard about while growing up. This Europe is filled with refugees. The streets are crowded and filled with stalls, booths, kiosks, and grocery stores all run by foreigners like himself.

Kareisha, Nazruddin's daughter, has become a pharmacist. Nazruddin has seen that all his children have a good job that they can do anywhere. Kareisha is serene and affectionate toward men. Salim thinks this is either the result of Nazruddin's kind upbringing or from a past affair.

Salim thinks about going home. The only street he knows well in London is Gloucester Road. Salim's hotel and Nazruddin's flat are both on...

A Bend in the River from BookRags. (c)2023 BookRags, Inc. All rights reserved.