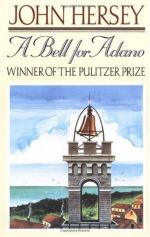 John Hersey
This Study Guide consists of approximately 25 pages of chapter summaries, quotes, character analysis, themes, and more - everything you need to sharpen your knowledge of A Bell for Adano.

A Bell for Adano Summary & Study Guide includes comprehensive information and analysis to help you understand the book. This study guide contains the following sections:

This detailed literature summary also contains Topics for Discussion on A Bell for Adano by John Hersey.

A Bell for Adano is about a man named Major Victor Joppolo, who is positioned in Adano, Italy as World War II is coming to a close. He positively impacts all of the people of Adano and improves their lives there, despite inherent limitations within the government, and is eventually forced to leave the town due to an overbearing, stubborn and ignorant General.

Major Joppolo arrives in Adano as part of the AMGOT team to restore peace and order to the town as World War II comes to a close. The town is starving and in desperate need of organization when Joppolo arrives. Despite the long list of orders that he is given, Joppolo looks around and determines what needs to be done. He encourages the bakers to begin baking bread again. He convinces the fishermen to fish again. He settles small matters with grace and humanity that the town has desperately needed since the Fascist regime. At first, the town hesitates and questions him, thinking that his democratic ways are a trick he is playing on them. Over time, however, they begin to see that he is serious and unlike the other military men that have traveled through their town. They tell him about a historic bell that was an important part of their town that the Fascists removed to melt down for bullets. The bell was over 700 years old and everyone in town dictated their life by the bell. Joppolo immediately promises to restore a good bell back to Adano.

Major Joppolo becomes friends with the townspeople, understanding their common sayings and how they operate in the town. He becomes a welcome and integral part of their community. He visits with Tomasino, the old fisherman, and becomes good friends with his family, in particular with his daughter Tina. He has a wife back home, but he still enjoys spending time with Tina. One afternoon, General Marvin travels through Adano and shoots a mule for being too slow in the road. Thereafter, he decrees, all carts and mules are banned from the roads of Adano. At first, Major Joppolo must comply with the decree, but he soon sees how ineffective this demand is for his town. For this reason, he overrides the General's dictate and allows carts to travel through town. Unfortunately, news of Joppolo's ignorance of the dictate makes its way back to General Marvin and he immediately dismisses Joppolo and reassigns him to another town without first analyzing whether Joppolo is good for the town or not. Joppolo finds out that he is dismissed on the same night that the town of Adano has thrown him a thank-you party. He quietly leaves the next day, hearing the sounds of the bell he finally put into place for them.

More summaries and resources for teaching or studying A Bell for Adano.

A Bell for Adano from BookRags. (c)2022 BookRags, Inc. All rights reserved.