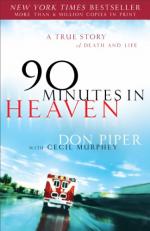 Don Piper
This Study Guide consists of approximately 41 pages of chapter summaries, quotes, character analysis, themes, and more - everything you need to sharpen your knowledge of 90 Minutes in Heaven.

This detailed literature summary also contains Topics for Discussion and a Free Quiz on 90 Minutes in Heaven by Don Piper.

Don Piper dies in a horrific car accident. Ninety minutes after his death, Don Piper begins singing "What a Friend We Have in Jesus" inside his crushed car. In what can only be termed an amazing miracle fueled by intense faith, Don Piper dies and then lives again after spending ninety minutes at heaven's gate. For the rest of his life, Don will try to come to terms with why he was allowed to experience the comfort of heaven only to be sent back to earth, a mangled version of his former self.

Don's Ford Focus is struck by a semi-truck while crossing a bridge. The impact sends Don's car into the side of the bridge, crushing him inside. Don's left leg is shattered in two places and missing four inches of bone. His right arm is dislocated and flung over the back of the driver's seat barely attached to his body. Don is covered in glass shards and looses most of the blood in his body. Surprisingly, Don suffers no internal or head injuries. As the result of his injuries, Don spends nearly a year in the hospital and many more months at home lying in a hospital bed. Don's left leg is placed in an experimental device known as the Ilizarov frame. This frame stretches Don's leg bones in order to replace most of the missing portion. Don suffers chronic pain for the rest of his life and cannot engage in many of the activities he formerly enjoyed.

Don is a minister and his strong faith is both a source of strength and frustration during his long recovery. During the ninety minutes that Don is dead, he experiences the awe of viewing heaven. Don does not feel sadness as a result of leaving his wife and three children behind. His faith secures him in the knowledge that someday they will join him in heaven and that God will continue to provide for his family on earth. Don is enveloped by brilliant light and melodious music. He feels comfortable and warm, ready to step through the gate and see the face of God. Don never sees God because he is suddenly sent back to earth.

On earth, Don battles severe depression, constant pain and continually questions why he was sent back. Although Don's faith never wavers throughout his arduous return to health, he does wonder about the fairness of being allowed to glimpse the glory of heaven before being sent back to a life that will never be normal again. It takes thousands of people praying for Don and several close friends confronting Don about his depression and bad attitude before he begins to come to terms with the whole situation. Don eventually reaches out to other people in pain and soon becomes a role model for others being treated with the Iliazrov frame. His message of the beauty of heaven inspires many, comforts others and brings more than a few people to know the Lord. As Don's physical recovery progresses, so does his emotional and spiritual recovery. Don learns to accept help when offered and to appreciate the small accomplishments in life.

More summaries and resources for teaching or studying 90 Minutes in Heaven.

90 Minutes in Heaven from Gale. ©2005-2006 Thomson Gale, a part of the Thomson Corporation. All rights reserved.