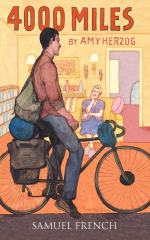 The following version of this play was used to create this study guide: Herzog, Amy. 4000 Miles. Samuel French, Inc. 2012.

4000 Miles opens with Leo, a lanky, dirty young man, entering his grandma Vera’s New York City apartment in the middle of the night. Vera is surprised at this unexpected visit, as Leo wheels his bicycle through the door. They discuss his arrival, and Vera realizes that her grandson needs a place to stay. When Vera mentions calling his mother, Leo attempts to leave. The two agree that he will stay in Vera’s spare bedroom as long as she does not notify the rest of the family about his arrival.

The following morning, Vera is on the telephone with Ginny, her neighbor. The two exchange phone calls on a daily basis, yet they never visit each other’s home. Vera and Leo make conversation about his cross country travels, his girlfriend, and his need for money. Vera gives him cash so that he can go to a climbing gym.

A few days later, Vera and Leo have an argument. Vera wants to tell his mother about his arrival. Leo refuses. Vera then addresses some troubling news she recently heard: Leo kissed his adopted sister, Lily, over the summer. Leo confirms this story, yet he adamantly states that he did nothing wrong.

The fourth scene finds Bec, Leo’s girlfriend, sitting awkwardly in Vera’s living room awaiting Leo’s arrival. When he finally enters, it is clear that the couple is having a disagreement. Leo is thrilled to see Bec, while she wants to break up with him. The two argue over their relationship, disappointments in each other, and Leo’s decision not to attend his friend Micah’s funeral. Micah died while biking with Leo over the summer. As Leo and Bec's fight begins to subside, Leo attempts to kiss Bec. She pulls away from him and leaves the apartment.

The following scene shows Leo and Vera smoking marijuana together. The two share intimate details about their lives that otherwise would not be discussed.

Scene 6 takes place in the middle of the night. Amanda, a young Chinese-American woman, stumbles into Vera’s apartment with Leo. Leo and Amanda appear to intend to have sex, but Vera enters in her nightgown. The old woman’s presence ruins the mood and Amanda leaves.

Leo brings Vera into the living room in the middle of the night and shares the full story of Micah’s death. The young men were biking through Kansas when a truck filled with chickens fell on Micah. When a public relations woman from the truck’s company the arrived at the scene, Leo threw Micah’s camera to the ground, ultimately destroying the machine and its contents. Leo struggles to tell the story, but finds comfort in Vera.

The following scene begins with Vera on the phone with Ginny. The women are arguing, and by the end of their conversation Vera impulsively decides to cut off all communication with her neighbor. This anger continues as she and Leo fight over her missing checkbook.

Scene 9 features Leo having a Skype conversation with his sister, Lily. Throughout their discussion, Leo addresses the kiss over the summer. He is apologetic and concerned. When Lily asks him to come home to St. Paul, he refuses and hangs up the call. A loud noise is then heard across the hall. Leo leaves Vera’s apartment to knock on Ginny’s door.

In the final scene, Leo and Vera prepare for Ginny’s funeral. As they are about to leave, Bec arrives. She came to see if Leo would like to go on a bicycle ride with her. Upon realizing the poor timing, Bec leaves. Leo tells Vera that he has prepared a speech for Ginny’s funeral. He practices the speech for Vera, then the two exit the apartment for the memorial service.