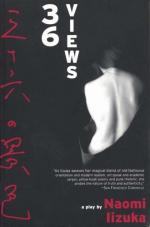 Naomi Iizuka
This Study Guide consists of approximately 23 pages of chapter summaries, quotes, character analysis, themes, and more - everything you need to sharpen your knowledge of 36 Views.

In scene 12, Elizabeth and Darius' mysterious meeting takes place. After beating around the bush, she finally explains her client purchased a piece of art that he cannot get as it is a national treasure and would be seized by authorities in transport. She tries indirectly to ask Darius to help her move the object, but he makes her come out and say exactly what she wants, at which point he bursts into a long diatribe about how dangerous it is to do such things, and how likely it is he could land in jail for the attempt. When he asks her if she has ever been in a jail in Asia, she names her price and he just laughs. He haggles her up to twice the amount, with half immediately and half on delivery, and she says it can be arranged.

More summaries and resources for teaching or studying 36 Views.