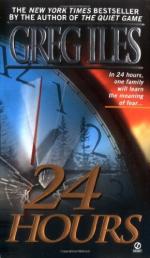 Greg Iles
This Study Guide consists of approximately 37 pages of chapter summaries, quotes, character analysis, themes, and more - everything you need to sharpen your knowledge of 24 Hours.

This detailed literature summary also contains Topics for Discussion and a Free Quiz on 24 Hours by Greg Iles.

24 Hours by Greg Iles is a terrifying novel of one family's ordeal with kidnappers. Karen Jennings returns home from taking her husband to the airport only to have her child kidnapped out of her own bedroom. A kidnapper remains with Karen, instructing her that her daughter is being held in an unknown location and her husband is in the company of another kidnapper. The family must wait until morning to make a money transfer that will pay the kidnappers' ransom. However, the kidnappers are unaware that Abby, Karen's six year old daughter, is a diabetic, dependent on insulin. The kidnappers also do not know to what extent the Jennings will go to get their little girl back. 24 Hours is a frightening thriller that will leave the reader mesmerized until the final page.

Karen and her daughter Abby drive her husband Will to the airport so that he can fly to a medical convention in Biloxi. Karen and Will argue because Will wants his family to accompany him, as they would normally do, but Karen must stay at home to prepare for a Junior League flower show. Karen takes Abby home, where she argues with the little girl over a snack that could compromise her diabetes. Finally Abby relents and goes to wash up as her mother has instructed. Before Abby can return to the kitchen, however, a kidnapper steps out of her bedroom and grabs the child, knocking her out with chloroform. The kidnapper slides the girl out a window to his partner and then goes to inform Karen of the situation.

A short time later, Will arrives at the hotel just in time to present a speech on a new drug he has developed that will be released the following month. After the speech, Will is approached by a young woman who talks her way into his hotel room and tells him that her partner has kidnapped his little girl. Will is to stay with this woman, Cheryl, until morning when he will make arrangements for two hundred thousand dollars to be transferred to a local bank and withdrawn to pay the ransom.

At home, Karen is trying to convince the kidnapper, Joe Hickey, that her daughter is diabetic and needs her insulin immediately. As they talk, a friend from the Junior League stops by. Karen manages to convince the woman to leave seconds before Hickey pulled his gun. Back in the house, Hickey relents and agrees to call his partner to warn him not to feed Abby any sweets.

Across town, a doctor and his wife are discussing an ordeal that happened to them a year before. Dr. and Mrs. McDill are previous victims of Hickey. Mrs. McDill does not want to go to the FBI because of her fears that her son will be harmed. Mrs. McDill also has a secret that she has kept from her husband: Hickey raped her during the kidnapping. Dr. McDill assures his wife that no one needs to know the details of her ordeal and convinces her to go with him to the FBI.

Hickey takes Karen to Abby, allowing her to give her a shot and leave insulin with her. On the way home, Hickey makes sexual overtures to Karen, forcing her to remove her pants and underwear. Back at the house, Hickey makes Karen dance a striptease for him. Karen convinces Hickey she needs to insert a diaphragm before he rapes her and Hickey allows her to enter the bathroom alone. Karen finds a scalper and hides it on her body before returning to Hickey. On the bed, Karen convinces Hickey she wants to perform oral sex. Instead, Karen holds the scalper to Hickey and forces him to call Abby's captor. Hickey complies for a moment, but then hits Karen over the head, causing her to slice his thigh with the scalpel.

Abby manages to escape the cabin where Huey Cotton is holding her captive. Abby hides in the woods and calls her mother on a cell phone. Karen speaks to her and puts in a call to her husband, informing him of these developments. Unfortunately, Huey finds Abby and returns her to the cabin, forcing Karen to relinquish her control over Hickey. Karen sews up Hickey's leg and becomes his docile servant once more.

Will holds a gun on Cheryl and calls the owner of the major cell phone provider in hopes that he can track the cell phone Abby was using. However, Will has trouble getting hold of the man. Will relinquishes the gun to Cheryl and begins thinking the situation over. Will knows he needs Cheryl's cooperation in whatever he does to keep Hickey in the dark. Will uses the drugs he has brought for his presentation to convince Cheryl to help. Later Will gets a hold of the cell phone provider's president, but the cell phone does not remain on long enough to get enough information to find Abby.

The following day, Karen's friend shows up again as she and Hickey are leaving to approve the money transfer. Hickey shoots the woman and leaves her for dead in the Jennings' driveway. Karen approves the transfer, but then Hickey becomes aware of police surveillance of her car. Hickey goes to the airport and steals a car from a woman, driving Karen on the highway toward the motel where he is to meet Cheryl with the money. At the same time, Will goes to the bank to withdraw the money and finds the FBI waiting for him. Will is unhappy with the way the FBI is handling the case and he decides to handle it on his own. Will withdraws extra money and offers it to Cheryl if she will help him.

Will and Cheryl go to the airport and take Will's plane up to try to find Abby. Will locates both Abby and Karen in the stolen car. Will lands the plane on the highway in front of the car in which Abby and Huey are. Will rescues Abby and helps Huey out of his crashed car. At the same time, Karen sees the plane and she attacks Hickey, causing him to shoot her. Hickey goes after Will, threatening to shoot Abby. Huey cannot allow harm to come to Abby, so he attacks Hickey, killing him instead. Cheryl is arrested, Huey placed in the hospital, and the Jennings family is rushed to the hospital, together, a family again.

More summaries and resources for teaching or studying 24 Hours.