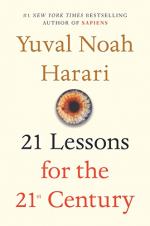 Yuval Noah Harari
This Study Guide consists of approximately 66 pages of chapter summaries, quotes, character analysis, themes, and more - everything you need to sharpen your knowledge of 21 Lessons For the 21st Century.

21 Lessons For the 21st Century Summary & Study Guide includes comprehensive information and analysis to help you understand the book. This study guide contains the following sections:

This detailed literature summary also contains Topics for Discussion on 21 Lessons For the 21st Century by Yuval Noah Harari.

The following version of this book was used to create this study guide: Harari, Yuval Noah. 21 Lessons for the 21st Century. Penguin Random House. Hardcover edition, 2018.

The book consists of a series of essay-like commentaries on aspects of global existence in the early part of the 21st Century. The “lessons” to be taken from each commentary appear as sub-titles at the beginning of each essay/chapter.

The book begins with an Introduction, in which the author outlines the personal and academic perspectives from which he approached the work. He also introduces some of the basic premises that underpin his analysis, including what he sees as the potentially enlightening connections between history, the present, and the future.

The author then divides his considerations into five parts, each of which includes several chapters. Part I is titled “The Technological Challenge.” In it, he considers how advances in technology relate to historical advances in mechanization and industrialization. He focuses primarily on how what developments in both information technology and biological technology might mean for how humans interact with others, with government, and with their own individual experiences of identity.

Part II is titled “The Political Challenge,” and considers different ways in which politics and economics have evolved, and may evolve in the future. He revisits a number of technology-related arguments and commentary first brought forward in Part I, here paying particular attention to how political perspectives and practices that were once limited to local or regional experiences have become, thanks to technology, more global in scale.

Part III is titled “Despair and Hope,” and looks at a range of emotions and attitudes encountered by human beings as part of their experiences as individuals and as members of a community. A key focus of the considerations here is how human beings respond, again as both individuals and members of community, to both perceived dangers and perceived opportunities to transcend the limits of physical existence.

Part IV is titled simply “Truth,” and moves further into the realm of philosophy as it considers the nature, qualities, and meaning of truth. Here, the author considers the differences between objective and subjective truth, suggesting that what has been defined as either sort of truth is no longer as clearly understandable or as clearly apparent as it has been historically. He also looks at how ideas about potential future truths are often considered more accessibly in science fiction than in more journalistic, science-based writing.

Part V is titled “Resilience,” and looks at different ways in which both individuals and communities can potentially function in a global civilization defined more and more by unexpected discoveries, rapid transformations, and new truths. He concludes Part V, and the book as a whole, with the suggestion that learning to emotionally detach from suffering, including the suffering caused by the sorts of change considered throughout the book as a whole, is potentially a useful and transformative process for individuals and communities to undertake. He suggests that meditation is one sure way in which human beings as individuals and humanity as a community can survive the increasing instability brought into existence by technology, and transformations brought about by technology.

More summaries and resources for teaching or studying 21 Lessons For the 21st Century.

21 Lessons For the 21st Century from BookRags. (c)2022 BookRags, Inc. All rights reserved.