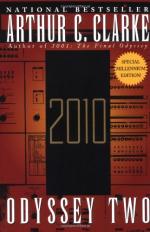 Arthur C. Clarke
This Study Guide consists of approximately 30 pages of chapter summaries, quotes, character analysis, themes, and more - everything you need to sharpen your knowledge of 2010.

"2010: Odyssey Two", is a novel of space and scientific exploration, written by legenday science fiction writer Arthur C. Clarke as a sequel to one of his most popular books. Dr. Heywood Floyd is recruited by his government and Russia's government alike in order to accompany space shuttle Leonov's crew to Jupiter to determine what happened to American spacecraft Discovery ten years earlier. Though the journey is long, Floyd and several other Americans are put into hibernation for much of the journey. Leonov is to board the now deserted Discovery and determine what caused the malfunction of the ships computer, known as Hal. The ship is also supposed to investigate the mysterious monolith similar to the one once found hovering over Tycho crater on the moon.

Floyd is brought out of hibernation early by a sudden and unexpected emergency. As Leonov approaches, still millions of miles from Jupiter, a message from home informs them that a Chinese ship, Tsien, is going to arrive at Jupiter long before Leonov will have a chance to do so. The crew aboard Leonov watches as the Chinese astronauts cleverly land upon the surface of Jupiter's moon Europa, clearly intending to use the ample water supply there as a means of fuel in order to reach the Discovery long before Leonov and claim it as salvage. An international incident is avoided, however, as the Tsien is suddenly destroyed. Floyd and the crew of Leonov investigate, and discover an alien life-form was responsible for its destruction.

Leonov reaches orbit around Jupiter unchallenged by the Tsien, but must still face several difficulties in space. Discovery is found to be in better shape than they had originally counted on, but they cannot determine what happened to the astronauts once on board, and thus learn nothing new about what happened ten years ago. Another American, Dr. Chandra, was responsible for Hal's design, and manages to get the computer up and running, but Floyd distrusts the doctor and fears that Hal might malfunction again, putting everyone's life in jeopardy. During this time, the entire crew has been suffering from the effects of isolation while onboard Leonov, and Floyd's family has begun to deteriorate, and his wife finally decides to leave him. Floyd enters a depression shortly after, as he has been unable to determine what the purpose of the Tycho Monolith is, nor has he been able to determine anything more about what happened to Discovery's crew.

Just as Floyd connects in friendship to another crew member, Walter Curnow, the monolith suddenly opens. The being who was once David Bowman, Discovery's commander, races towards Earth, sparking an international debate. Bowman rapidly returns to Jupiter, and surveys the gas giant and surrounding moons for signs of life and possible intelligence. Disappointed by what Bowman finds, the beings controlling him decide to drastically change the solar system so that more intelligent life might evolve. They begin a process that will turn Jupiter into a second sun.

Wanting to save his former colleagues, Bowman messages Leonov's crew that they have fifteen days to depart from Jupiter. Suddenly, the monolith disappears, and Captain Orlova decides to use Discover's extra fuel supply to jettison them out of Jupiter's orbit towards Earth. Along the way, Jupiter detonates, sending a way of radiation that nearly destroys the ship and results in Jupiter having become the second Sun in Earth's sky.

More summaries and resources for teaching or studying 2010: Odyssey Two.