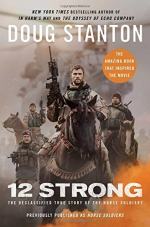 12 Strong: The Declassified True Story of the Horse Soldiers Summary & Study Guide includes comprehensive information and analysis to help you understand the book. This study guide contains the following sections:

This detailed literature summary also contains Topics for Discussion on 12 Strong: The Declassified True Story of the Horse Soldiers by Doug Stanton.

The following version of the book was used to create this study guide: Stanton, Doug. 12 Strong: The Declassified True Story of the Horse Soldiers. Scribner, May 5, 2009. Kindle.

In 12 Strong: The Declassified True Story of the Horse Soldiers by Doug Stanton, leaders of the United States armed forces found themselves in uncharted territory after terrorists launched an attack on American soil on September 11, 2001. They wanted soldiers on the ground in Afghanistan quickly but there was no plan in place for the type of war they needed to fight. Hoping to help the Afghanistan people overcome the Taliban and take back control of their own county, a small group of Special Forces soldiers was deployed and embedded with Northern Alliance forces.

The Americans’ plan to help the Afghanistan people focused on uniting three Afghani warlords: Abdul Rashid Dostum, Atta Mohammed Noor, and Naji Mohammed Mohaqeq. The CIA gave these men money and supplies to encourage them to work together against the Taliban instead of fighting against one another. The first group of Special Forces soldiers in Afghanistan was embedded with Dostum’s men. These men, led by Mitch Nelson, were surprised to learn they would have to ride horses into battle. The job of Nelson’s team was to aid Dostum’s forces using strategically dropped bombs and air strikes.

As Nelson and the other Americans got acquainted with the Afghans they were inspired by the courage and selflessness with which those soldiers fought. Stanton tells stories in his book about soldiers who came to the battle with no shoes and others with prosthetic legs determined to help in the fight against the Taliban. The soldiers had little food and depleted supplies of ammunition. They were sometimes sent into battle with fewer than ten bullets. After each day’s fighting was finished, the Americans were impressed with the way the Afghans took care of their horses first. These men would give their horses the first chance at any available water and were careful to blanket their horses but often slept with no cover themselves.

Stanton incorporates humor into his book as he describes how the low-tech Afghans responded to the Americans’ ability to drop bombs on specific locations. He notes how the soldiers described the situation as being “like the Flintstones were meeting the Jetsons” (146). When the Americans first began dropping bombs on the Taliban, the Taliban were scared because they had no idea from where the bombs were coming. Stanton describes how Dostum would talk to the Taliban on the radio, taunting them because a woman was flying the plane that was bombing them.

Using a two-sided attack with one team pushing the Taliban out of their strongholds working toward Mazar-i-Sharif and another positioned on the rear side of the Taliban to destroy hidden tanks and caches of ammunition, the American and Northern Alliance forces made a major victory when they ran the majority of the Taliban out of Mazar. The Americans began to believe victory was in sight and they would be able to go home soon.

Trouble began when a group of 600 Taliban claiming they wanted to surrender were imprisoned in Qala-i-Janghi, a fortress in Mazar. The Americans saw problems with the surrender and the plan to hold the prisoners in the fort from the beginning but knew they had to let the Afghans have charge of the situation. The Americans sensed that the Taliban had an ulterior motive in their surrender. They also feared that if they were held captive in the fort they would find the cache of weapons stored there that the Americans had not yet destroyed.

While Mike Spann and Dave Olson, two CIA paramilitary officers were attempting to question the Taliban, the prisoners revolted and took charge of the fort. Sadly, Spann was killed during the attack. With few soldiers left to subdue the Taliban, Major Mark Mitchell feared that they would lose the battle against the terrorists. Despite the odds stacked against them, the American and Northern Alliance forces prevailed over the Taliban. Among the eighty-six Taliban who surrendered at the end of the siege was one American, John Walker Lindh who pleaded guilty to “contributing services to the Taliban and carrying explosives in commission of a felony” (350) and was sentenced to twenty years in prison.