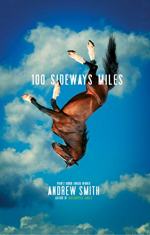 Plot Summary
+Chapters Summary and Analysis
Part 1 The Perigee Moon: The Quit Mission, Twenty Miles Per Second, Five Euros in Dollars
Part 1 The Perigee Moon: Shirts, Skins, Frisbees and Flounders; Doors That Open and Open; Space Dogs and Bullfighters
Part 1 The Perigee Moon: The Politics of Teenage Grudges; My Neighbor Julia; Pizza-Delivery Boy
Part 1 The Perigee Moon: William Mulholland's Self-Taught Mistake; One Atom At a Time; Blake Grunwald's Shitty Party; The Governor of California
Part 2 The Perseids: Unlucky Lindy; I Am Not a Cannibal; Sticky Atoms
Part 2 The Perseids: The Driving Range; I Need An Extra Bag; The Boy in the Book
Part 2 The Perseids: A Play About the Epileptic Boy and Ants; The Lake That Isn't a Lake; Welcoming the Aliens; Going Home
Part 3 The Planet of Humans and Dogs: The Slowpoke Moon; The Berlin Wall; True Grits
Part 3 The Planet of Humans and Dogs: The Boy, The Dog and The Epileptic; The Dog Hospital; A Detour in the Year We Grew Up; The Lazarus Door
Free Quiz
Characters
Symbols and Symbolism
Settings
Themes and Motifs
Styles
Quotes
Order our 100 Sideways Miles Study Guide

Andrew Smith
This Study Guide consists of approximately 34 pages of chapter summaries, quotes, character analysis, themes, and more - everything you need to sharpen your knowledge of 100 Sideways Miles.

Finn Easton and his best friend, Cade Hernandez, are juniors in high school in San Francisquito, California. Finn measures time in miles because it takes the earth to travel around the sun at 20 miles per second, so in about four seconds, the earth travels about 100 miles. When he was seven, Finn had been injured and his mother killed when a dead horse falls from a truck driving over a bridge and hits them. In Finn's calculations, in the time it took for the horse to fall on him and his mother, it fell 100 sideways miles.

As a result of the accident, Finn is epileptic and had back surgery which left him with a distinctive pattern of scars on his back. Finn's father is a popular author and included elements about Finn in his book which tells the story of a boy with epilepsy and an obvious scar who longs to be normal in a world where winged aliens invade earth and try to eat people. Even though his father says the boy character is not Finn, Finn can't help but feel that his life is showcased in the book but he doesn't have any idea how it turns out.

Finn's best friend, Cade Hernandez, is a good-looking renegade who antagonizes teachers but he always has Finn's best interests at heart. Finn's father doesn't like Finn hanging out with Cade but Finn loves the adventures he has with his friend and savors the time spent away from his family who tend to be overprotective because of Finn's epilepsy.

Finn falls in love with Julia Bishop, a girl who transfers to his school late in the year because she needs to be away from her Chicago home to recover from her boyfriend's raping her. Finn is heartbroken when Julia decides to return to Chicago a few months later. Finn and Cade's destinies alter when on their way to a college visit in Oklahoma they rescue a boy and an old man from their van trapped in a flooding river. They realize that it is up to them to create their own destinies so they switch gears and head to Chicago to see Julia instead.

More summaries and resources for teaching or studying 100 Sideways Miles.