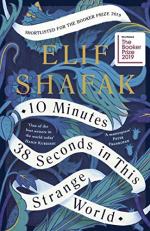 Elif Shafak
This Study Guide consists of approximately 41 pages of chapter summaries, quotes, character analysis, themes, and more - everything you need to sharpen your knowledge of 10 Minutes 38 Seconds in This Strange World.

This detailed literature summary also contains Quotes and a Free Quiz on 10 Minutes 38 Seconds in This Strange World by Elif Shafak.

The following version of this book was used to create the guide: Shafak, Elif. 10 Minutes 38 Seconds (in This Strange World). Bloomsbury Publishing, Inc., 2019.

In the first section of the novel, “The End,” Leila is murdered and left on the side of the road. Lying unnoticed, Leila realizes she still possesses access to her memories. She wishes her friends would find her and wishes she had more time to ask all of the questions she never go to ask. Shortly thereafter, two boys notice her body, call her a whore, and steal her necklace.

Part One, “The Body,” is then divided into smaller sections, each marked with the minute following Leila’s death. Each minute begins with a new taste memory, triggering Leila’s drift into the past. Over the course of Part One, the largest section of the novel, the narrator delves into Leila’s life prior to and throughout her time in Istanbul.

Born Leyla Afife Kamile to Binnaz and Haroun, Leila’s infancy was steeped in deception. Because Haroun’s other wife, Suzan, was incapable of bearing children, he demanded Binnaz give the baby to her. He told the women to keep the secret from Leila forever. Growing up, therefore, Leila believed Suzan was her mother, and Binnaz was her mentally unstable aunt. One day Binnaz revealed the truth Leila, confusing her sense of family and self. She kept the truth a secret, afraid of how Suzan would react.

Not long after, during a family holiday, her uncle snuck into her bed and molested her. Much like Binnaz, he demanded Leila’s silence. His abuse continued for a decade to come. After Leila’s brother Tarkan died after years of illness, Haroun threw himself into an intense bout of religiosity, demanding his family adhere to his new rigid belief system. He was particularly cruel and punishing to Leila. He even forbade her to listen to the news.

Having formed a friendship with Sabotage Sinan, a boy at school, Leila found solace in their companionship. Haroun, however, compromised this healthy alliance as well when he pulled Leila out of school. Not long after, Leila announced that she was pregnant with her uncle’s child. No one believed her uncle had been molesting her. Though she lost the child, Haroun insisted she marry her cousin to cover the affair. Desperate to escape, Leila, with Sinan’s help fled to Istanbul.

There she began working as a prostitute. Her family disowned her. Though she was often miserable and despairing, she made many friends. She met Jameelah during a night in custody; Nalan sang outside her window at the brothel; Zaynab122 was the only woman’s company at the house that Leila appreciated; she and Humeyra rescued a cat together. Though each of her new friends was vastly different one from another, in each of them Leila perceived, not only sorrow and loneliness, but goodness and beauty.

One day, a young leftist revolutionary came to the brothel. Once inside Leila’s room, however, the man, D/Ali, had no interest in sex, and suggested the two of them talk instead: he had fallen in love with Leila at first sight. He continued visiting until they later marry with the madam, Bitter Ma’s blessing.

Not long after moving into a flat together, D/Ali was killed in a riotous march in town. Leila retained the apartment in order to preserve D/Ali’s memory. Though she stopped working for Bitter Ma, she kept up with all of her friends. Sinan had also moved to the city and joined their circle.

Years later, Bitter Ma called Leila with an assignment. Leila agreed for the money, vowing it would be the last time. When she came out of the hotel, however, she was conned into a vehicle by two strange men and murdered.

Parts Two and Three, “The Body” and “The Soul,” are also divided into smaller subsections, which follow Leila’s friends through the hours after her death.

Leila’s body is discovered by authorities and delivered to a morgue. Though her friends are waiting outside the gate, the medical examiner refuses to give them the body. The orderly secretly tells them she is buried in the Cemetery of the Companionless.

The five friends reconvene at Leila’s apartment, immobilized by grief. While the others mourn and recall memories of their deceased friend, Nalan concocts a plan. She tells everyone, whether they agree or not, she is going to exhume Leila’s grave and grant her a proper burial. Though hesitant and afraid, the others finally agree. They speed to the eerie and remote cemetery. Nalan digs up Leila’s body and the friends frantically transport her to their vehicle. Having caught them speeding earlier in the evening, the police are not far off. They trace the friends all over town.

Panicking, they do not know what to do with Leila’s body, as cops seem to be everywhere. Finally Zaynab122 remembers Leila wanted to be buried in the ocean. They rush to the Bosphorous Bridge, and just as the police are arriving, toss her body over. Leila’s spirit is freed to the water, and finds ultimate peace below the surface.

Despite Leila’s passing, the five remaining friends retain their friendship, realizing they must rely on one another for emotional survival in the ever-shifting waters of their lives in Istanbul.