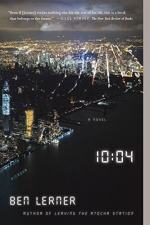 The narrator for most of “10:04” is a 33-year-old, never-named New York writer who struggles with turning a short story he has written – “The Golden Vanity” – into a novel. The narrator is obsessed with time, reality, and the potential for possible futures.

Best friends with Alex, the narrator is sought by Alex to give her a baby. At the same time, the narrator must put his relationship with Alena on hold so he can have sex with Alex because Alex cannot handle his having sex with more than one woman at a time.

The narrator learns that he has a heart condition which may kill him should the arteries of his heart enlarge. By the end of the novel, Alex has conceived and the narrator’s heart has not grown in danger. The narrator is ultimately denoted as a fictionalized version of Ben Lerner, who personally supplants...