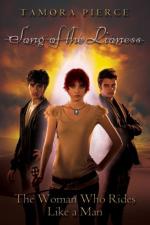 Alanna's early adventures are related in the first two books of The Song of the Lioness Quartet. Alanna: the First Adventure introduces us to the heroine when she disguises herself as a boy in order to train as a knight. In the Hand of the Goddess pits Alanna against a dangerous sorcerer, Duke Roger of Conte, as she fights to earn her shield as a knight of the realm. Alanna's adventures following her encounter with the Bahzir in The Woman Who Rides Like a Man can be found in Book Four of the Quartet: Lioness Rampant. In this concluding adventure, Alanna sets off on a quest for a legendary magic talisman, confronts the evil Duke Roger yet again, and must choose among the three men who have engaged her affections.