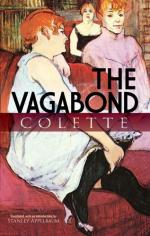 Colette
This Study Guide consists of approximately 9 pages of chapter summaries, quotes, character analysis, themes, and more - everything you need to sharpen your knowledge of The Vagabond.

The Vagabond was turned into a quite successful play by Colette and Leopold Marchand, with whom she collaborated on several dramas, in 1923. The chief differences between the novel and the play are that the stage version is presented as essentially a comedy and that the dialogue is livelier, written in a considerably lighter style and vein. In revivals of this play, Colette occasionally played Renee.

The first film adaptation was done by Colette, who composed the scenario, and Musidora and Eugenio Peregio, in 1917. This version was filmed in Rome and released in Paris in 1918. It adheres fairly closely to the stage play.

Another movie was made of the story.

In this enterprise Colette contributed only some additional scenes; the script was by Solange Bussi, who took some liberties with the novel. The film was issued in 1932.

More summaries and resources for teaching or studying The Vagabond.

The Vagabond from Gale. ©2005-2006 Thomson Gale, a part of the Thomson Corporation. All rights reserved.