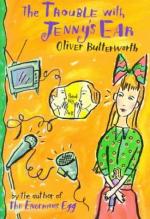 Oliver Butterworth
This Study Guide consists of approximately 11 pages of chapter summaries, quotes, character analysis, themes, and more - everything you need to sharpen your knowledge of The Trouble with Jenny's Ear.

Oliver Butterworth was born on May 23, 1915, in Hartford, Connecticut, a town which had once been the residence of the famous American authors Mark Twain and Harriet Beecher Stowe.

One of three children, he grew up in a nearby farmhouse surrounded by pasture and woodland. Raised by his father after his mother's death, Butterworth attended high school at a boy's boarding school in the western part of the state.

After graduation he attended Dartmouth and earned a bachelor's degree in 1937.

Butterworth began his teaching career as an instructor in English and Latin at a school for boys. In 1940 he married Miriam Brooks, a young woman who shared his enthusiasm for the outdoors, and together they raised four children.

In the meantime, he continued his schooling and spent a single summer at Harvard as a graduate student in 1941.

He obtained his master's degree from Vermont's Middlebury...

More summaries and resources for teaching or studying The Trouble with Jenny's Ear.

The Trouble with Jenny's Ear from Gale. ©2005-2006 Thomson Gale, a part of the Thomson Corporation. All rights reserved.