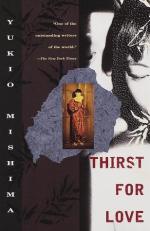 Yukio Mishima
This Study Guide consists of approximately 8 pages of chapter summaries, quotes, character analysis, themes, and more - everything you need to sharpen your knowledge of Thirst for Love.

Thirst for Love was produced by Kazu Otsuka in 1967 and directed by Izen Kurahara. The film does not follow the plot of the novel very closely, but the essentials are there: the brooding sexual frustration of the heroine, the prying of the relatives around her, the virile strength of the young man she is fascinated by.

The Temple of the Golden Pavilion (1959) was made into the film The Conflagration ( Enjo ) in 1958, directed by Kon Ichikawa. It emphasizes the protagonist's disgust at his father's weakness and his mother's sexual infidelities as the root causes of his deviation.

Ichikawa has considered it the film he enjoyed most.

The story "Patriotism" was made into the film Rite of Love and Death in 1965. It was directed by Mishima himself, with the assistance of Masaki Domoto. First shown in Paris with French subtitles in September of 1965, it was runner-up for the Grand Prix...

More summaries and resources for teaching or studying Thirst for Love.

Thirst for Love from Gale. ©2005-2006 Thomson Gale, a part of the Thomson Corporation. All rights reserved.