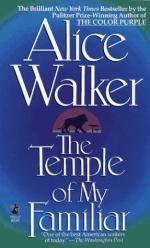 The Temple of My Familiar Study Questions & Topics for Discussion

Alice Walker
This Study Guide consists of approximately 11 pages of chapter summaries, quotes, character analysis, themes, and more - everything you need to sharpen your knowledge of The Temple of My Familiar.

Inasmuch as The Temple of My Familiar can be classified, it resembles a novel of ideas and perhaps it is best approached in that way. A place to start might be with the controversy over a premise influenced by the Black Aesthetic Movement that the history of oppressed peoples can and should be rewritten imaginatively in order to deconstruct "the ideological assumptions underpinning Western constructions of reality." Was Walker successful anywhere in the novel with this technique?

A second thrust of the novel is in advancing ideas about where the world should be headed in areas such as the institution of marriage, directions for social change, attitudes toward racism, mankind's relationship toward animals, and so forth. Walker's ideas should stimulate an interesting discussion.

1. All the central characters seem to evolve to a higher consciousness. What social responsibilities, if any, are part of their new consciousness?

More summaries and resources for teaching or studying The Temple of My Familiar.

The Temple of My Familiar from Gale. ©2005-2006 Thomson Gale, a part of the Thomson Corporation. All rights reserved.