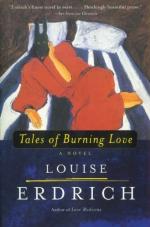 Louise Erdrich
This Study Guide consists of approximately 15 pages of chapter summaries, quotes, character analysis, themes, and more - everything you need to sharpen your knowledge of Tales of Burning Love.

Erdrich handles characters differently from most writers. The subordination of major and minor characters common among other writers is missing from her novels, and Tales of Burning Love, with its huge cast of characters, is no exception.

While many characters from previous novels appear here in cameo roles, few unimportant characters exist in the book.

Jack Mauser is no more important than his wives; characters such as Eleanor's parents, particularly her mother, are significant. To some of Erdrich's critics, this absence of a hierarchy and emphasis on the group is a characteristic of her writing, a part of her ethics as a writer and person.

Many characters in Tales of Burning Love appear in other Erdrich novels. These include Leopolda, Lyman Lamartine, Lipsha Morrissey, who is not named here, June Morrissey, Dot Mauser, Mary Adare, Celestine Adare, and a host of others, some named and some not. Part...

More summaries and resources for teaching or studying Tales of Burning Love.

Tales of Burning Love from Gale. ©2005-2006 Thomson Gale, a part of the Thomson Corporation. All rights reserved.