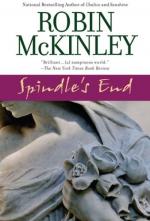 A retelling of the "Sleeping Beauty" tale, Spindle's End is Robin McKinley's fifth retelling of a fairy tale. (McKinley's Beauty 1978, and Rose Daughter 1997, both retell Madame Le Prince de Beaumont's "Beauty and the Beast," The Outlaws of Sherwood 1988, retells the legend of Robin Hood, and Deerskin 1993, retells Charles Perrault's "Donkeyskin"). As such, McKinley's Spindle's End demonstrates her increasing mastery over the art of retellings. Within the text, McKinley describes the literary and mythic function of fairy tales by referring to popular fairy tales as well as contemporary critical readings of those tales.

In the tale of "Sleeping Beauty," the king and queen invite fairy godmothers to bestow gifts to their long-awaited daughter.

But there is one more fairy, angered that she has not been asked to be a fairy godmother or invited to the celebration, who appears and curses the baby princess. The evil fairy declares that on...