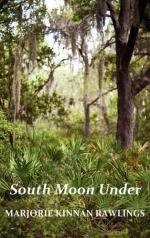 Literary Precedents for South Moon Under

Marjorie Kinnan Rawlings
This Study Guide consists of approximately 5 pages of chapter summaries, quotes, character analysis, themes, and more - everything you need to sharpen your knowledge of South Moon Under.

In her depiction of Florida as a "frontier eden," Rawlings has been compared by Gordon Bigelow to James Fenimore Cooper, with Lant Jacklin (among other Rawlings characters) resembling Cooper's Natty Bumppo — tough, honorable, little educated, selfreliant, a woodsman. Although her style is a bit uneven in South Moon Under, it probably owes something (as does the style of so many twentiethcentury writers) to Hemingway.

In its central deterministic theme, as well as its carefully recorded details of the life of some of the least affluent members of society, South Moon Under seems squarely in the tradition of literary Naturalists — Zola and more immediately Frank Norris and Theodore Dreiser. Where Rawlings differs is in depicting things less grittily and in always giving her characters the courage, the strength, the skill, the cheerfulness, to confront their world gracefully.

More summaries and resources for teaching or studying South Moon Under.

South Moon Under from Gale. ©2005-2006 Thomson Gale, a part of the Thomson Corporation. All rights reserved.