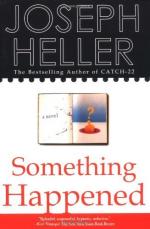 Joseph Heller
This Study Guide consists of approximately 10 pages of chapter summaries, quotes, character analysis, themes, and more - everything you need to sharpen your knowledge of Something Happened.

Something Happened Summary & Study Guide includes comprehensive information and analysis to help you understand the book. This study guide contains the following sections:

Preview of Something Happened Summary:

The title of Heller's second novel reveals its major theme — that there is an unidentifiable something that happened to create anxiety and disillusionment in its Everyman protagonist.

Through Bob Slocum's middle-age crisis, Heller confronts us with the truth that as humans age, they lose innocence and confidence in their ability to shape their destinies. Success in the corporate world does not guarantee happiness. Dreams of family affection and harmony are quickly dispelled by the realities of combativeness, insecurity, and guilt that characterize the Slocum family's interactions. Bob Slocum's idealism becomes transformed into acceptance of life's banalities. As Heller explains, Something Happened "is a very bleak book, a melancholy illumination on the part of a man in his forties who looks at his past and looks at his present and tries to see some kind of future and sees not much of any."

Moreover, not only does the...

More summaries and resources for teaching or studying Something Happened.

Something Happened from Gale. ©2005-2006 Thomson Gale, a part of the Thomson Corporation. All rights reserved.