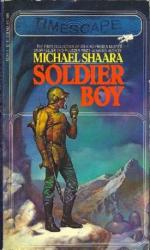 Michael Shaara
This Study Guide consists of approximately 5 pages of chapter summaries, quotes, character analysis, themes, and more - everything you need to sharpen your knowledge of Soldier Boy.

Shaara's excellence in the short story form accounts not only for the success of the kaleidoscopic presentation of The Killer Angels but for some difficulty in the larger scope of the traditionally narrated novel. As reviewer John Pine has pointed out, The Broken Place attempted to cover too much — war, love, boxing, travel; and in The Herald, Shaara seemed unable to concentrate on a single point of view, a disturbing problem in a novel with a single unsettling message. In the burning focus of a short story, however, Shaara conveys the intensity of his vision supremely well, since the genre demands that he choose his words with artistic inevitability. His diction often resembles Beethoven's chord sequences: no other choice seems possible.

More summaries and resources for teaching or studying Soldier Boy.

Soldier Boy from Gale. ©2005-2006 Thomson Gale, a part of the Thomson Corporation. All rights reserved.