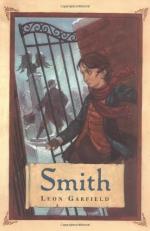 From the moment that Smith, a ragged eighteenth-century London urchin, witnesses the murder of an old man whose pocket he has just picked, he lives between hope and fear: hope that the document he stole from the old man will spell his fortune, and fear that the old man's assailants will murder him next. Smith cannot read and thus is unable to decipher the document. His journey toward enlightenment takes him through the alleys and shadowy corners of London, from thieves' dens to the homes of the wealthy. Smith brings to his quest shrewd common sense, the quickness of a scurrying rat, and a halfdeveloped sense of human kindness.

While pursuing the meaning of the document, he learns a great deal about justice of all kinds, and he acts with a desperate courage that makes the unexpected ending appropriate and satisfying.

The book's characters exhibit the limitations to...