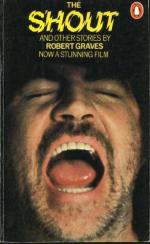 Get The Shout from Amazon.com
View the Study Pack
Short Guide
Order our The Shout Short Guide

Robert Graves
This Study Guide consists of approximately 5 pages of chapter summaries, quotes, character analysis, themes, and more - everything you need to sharpen your knowledge of The Shout.

The marriage of Richard and Rachel is an open one; by mutual agreement, neither is obligated to remain faithful to the other "because they wished to feel themselves bound by love rather than ceremony." The absence of certainties in their relationship makes them ready victims for Charles Crossley, who insinuates himself into their house and divides the two.

Although the idea of "open marriage" became a social issue in the 1970s, Graves uses the possibility of sanctioned infidelity to set up a psychological study of his characters.

Morality is not at issue; rather the demonic forces that can enter relationships, causing the partners to delude each other. The elements of illusion and reality beckon the characters to make excuses for their behavior, thus allowing destructive forces the potential to propel them apart.

More summaries and resources for teaching or studying The Shout.

The Shout from Gale. ©2005-2006 Thomson Gale, a part of the Thomson Corporation. All rights reserved.