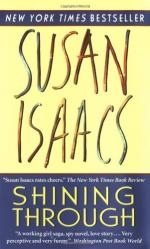 Shining Through Summary & Study Guide includes comprehensive information and analysis to help you understand the book. This study guide contains the following sections:

Preview of Shining Through Summary:

Shining Through tells the barely credible tale of an obscure "old-maid" legal secretary, who volunteers for a hazardous spy mission to Nazi Germany. She carries it out successfully — shining through — to find both safe haven in Switzerland and true love waiting for her at the end of the novel. The book thus mixes major elements from several different genres.

The romance motif holds the perennial appeal of the Cinderella story, but in a version shaped to the lost innocence of the twentieth century. It is not enough for this heroine to be beautiful and deserving; she must also prove herself in a harrowing ordeal before the happy ending is attained. Her previous marriage to a man who outwardly has all the attributes of the handsome prince, but who cannot love her, adds another nonstandard twist.