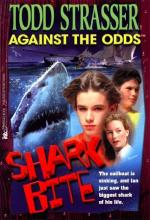 Todd Strasser
This Study Guide consists of approximately 17 pages of chapter summaries, quotes, character analysis, themes, and more - everything you need to sharpen your knowledge of Shark Bite.

1. Describe Ian's and Talia's family situation and compare it to Stuart's.

2. Why did Ian and Talia decide to accept the invitation for a sailboat trip to Cancun? Explain the different attitudes of Ian and Talia towards the trip.

3. What does Ian think of Talia's relationship to Stuart? What is it that Talia finds admirable in Stuart?

4. Contrast the two male protagonists Ian and Stuart and characterize their behavior at the beginning of the novel.

5. Describe the literary purpose of Buck Green and explain his relationship to his son.

6. Discuss the character of Pops and his function in the opening scene of the text.

7. How do the adolescent protagonists cope with the storm? Describe their emotional reactions to the dramatic turn of events.

8. In which way does the dangerous situation on the boat during the storm reveal the characters of the three youths?

More summaries and resources for teaching or studying Shark Bite.

Shark Bite from Gale. ©2005-2006 Thomson Gale, a part of the Thomson Corporation. All rights reserved.