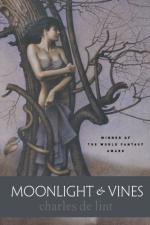 Seven for a Secret Overview

Seven for a Secret Summary & Study Guide includes comprehensive information and analysis to help you understand the book. This study guide contains the following sections:

Preview of Seven for a Secret Summary:

In "Seven for a Secret," collected in Moonlight and Vines, de Lint spins a fairy tale that takes place in an unnamed city, perhaps in his fictional Newford, his partly Canadian, partly American city that is the setting for many of his tales, although the story's mention of "Devil's Night" may be an allusion to Detroit. It opens, "What follows is imagined, but it happened just so"; de Lint often blurs the distinction between reality and the supernatural, so this line captures the spirit of "Seven for a Secret," in which the supernatural seems natural, and the harsh lives of broken people can be mended, at least a little.