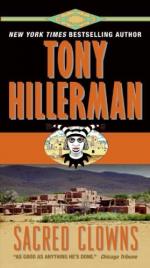 Tony Hillerman
This Study Guide consists of approximately 7 pages of chapter summaries, quotes, character analysis, themes, and more - everything you need to sharpen your knowledge of Sacred Clowns.

The two protagonists of Sacred Clowns are once again Hillerman's Navajo policemen, Officer Jim Chee and Lieutenant Joe Leaphorn. In this novel, however, they now work together in the new Special Investigations Office on the Navajo Reservation.

Leaphorn, the older and more analytical of the two, is now Chee's immediate supervisor. Various conflicts arise between them. Leaphorn attempts to force Chee to be more thorough in his reports and less impulsive in his methods. Chee resents Leaphorn's control, especially when the lieutenant assigns him to find a runaway Navajo boy rather than to a more important case.

As the novel progresses, however, the two men come to understand each other. Leaphorn not only recognizes that he himself was impulsive when he was Chee's age, but he also experiences paternal feelings for the younger man.

The novel provides both Chee and Leaphorn with romantic interests.

More summaries and resources for teaching or studying Sacred Clowns.

Sacred Clowns from Gale. ©2005-2006 Thomson Gale, a part of the Thomson Corporation. All rights reserved.